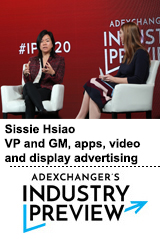 For instance, Google is coming around to some industry initiatives where it’s been a notable holdout. In spring of 2020, Google will implement Sellers.json, an IAB Tech Lab-backed tool for buyers to track supply chain intermediaries, similar to what publishers have done with Ads.txt, according to Sissie Hsiao, VP and GM of Google’s apps, video and display advertising groups, speaking Tuesday at AdExchanger’s Industry Preview conference in New York City.

One reason Sellers.json hasn’t reached critical scale in its first year is that, unlike Ads.txt, Google didn’t champion its adoption.

In another example, Google previously announced that it would adopt the IAB Europe’s Transparency and Consent Framework in Q1 2020, after dragging its feet for more than a year.

And Google consulted with the IAB Tech Lab and other ad tech engineering teams to help develop a browser extension  so Chrome users can see what tags are on a page and why they are being targeted by an ad, Hsiao said. The product will launch this quarter, and is a mix between a Ghostery-like web tracking service and Facebook’s “Why am I seeing this?” ad icon.

Hsiao maintained that Google’s own ad tech and ad network businesses will also be affected by the disappearance of Chrome cookies in two years, same as other players in the space.

Google research from last year showed a 52% decrease in value per impression when a cookie is not available. And that applies to Google’s own tech, which is separate from the first-party Google properties YouTube, Maps or Search.

“That’s not a sustainable place for us and especially publishers to be,” Hsiao said. “I’m optimistic that (within two years) we can give them enough feedback to create solutions that replace some of the techniques currently filled by third-party cookies.”

She said the Google ads team isn’t creating those policies – it’s a constituent like other ad tech companies that must submit feedback to the Chrome developer team.

The health of the ad tech ecosystem – Google’s would-be rivals – is particularly important to Google right now in light of the current antitrust scrutiny it’s receiving from regulators.

Hsiao argued in a September blog post that DSPs and SSPs are thriving, not being crushed by Google’s walled garden. Keeping Google’s ad tech units on an even playing field with the open ecosystem – and separate from the Chrome unit that actually makes privacy rules – could be critical to avoid a break-up or other tough regulatory actions.

Programmatic auction-based businesses work best when there is a marketplace of alternatives, Hsiao said. “Our goal and Chrome’s goal is that the ecosystem can be sustainable and funded.”