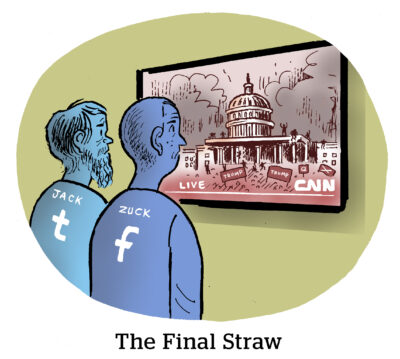 Babylist began as a registry to combine a gift registry and services (like helping new parents by arranging dog walks) with an affiliate revenue model. Although the approach worked well, 85% of Babylist’s sales went to a single retail partner, CEO and Founder Natalie Gordon tells Ben Thompson at Stratechery. (The undisclosed partner is almost certainly Amazon, where Gordon was a software engineer prior to founding Babylist.)

Leaning so heavily on one partner created an untenable, risky situation, which is why (you guessed it) Babylist launched its own retail business. This allows Babylist to sell directly to customers rather than channeling shoppers elsewhere and earning a cut.

Retail turned out to be a lifesaver. Amazon ended up dramatically reducing affiliate commission and, in 2020, it phased out all third-party affiliate partners.

Babylist’s retail biz is helping it transform into an “audience company,” Gordon says. Rather than expanding into other registry moments, like weddings, Babylist wants to provide a “Family Graph” (Thompson’s term), focusing on new mothers, new grandmothers and new aunts and on understanding women at a particular – for Babylist, particularly lucrative – moment in their lives.

And since Babylist can now channel people to its own store and to other retailers, its advertising business has now become its third largest line of revenue.

The nonprofit Check My Ads pushes (some might say publicly shames) brands, agencies and ad tech providers whose dollars and services monetize misinformation. It’s seen a fair amount of success getting buy-side players to pull their dollars from outlets that promote discredited 2020 election conspiracies and that downplay the January 6 riots in Washington, D.C.

Ad tech companies have policies against monetizing misinformation, violence and political propaganda, but problematic content routinely gets through.

Check My Ads regularly taps its strong social media following and agency network to send outraged messages to ad tech execs when programmatic pipes monetize right-wing misinformation. It’s a dogged approach, but by targeting exchanges one-by-one, Check My Ads has cut many millions of dollars that were flowing to outlets, such as Breitbart, and divisive personalities, like Steve Bannon and Dan Bongino.

Now, the nonprofit is applying its playbook to Fox News, NPR reports. Check My Ads is zeroing in on Fox’s continued propagation of the stolen election conspiracy and refusal to accurately report on the storming of the Capitol. Its goal is to convince ad exchanges to drop Fox News based on the criteria in their own content policies.

“We can do more than just complain and be sad and tweet and share with each other that we’re sad about where Fox News has taken us as a country,” Nandini Jammi, co-founder of Check My Ads, told NPR. “We can actually fight back.”

From Server To Survey

The idea isn’t new. Publishers such as the Financial Times sometimes allow users past a paywall if they answer a few quick questions. The Atlantic, Gannett and Hearst are also investing in survey data, Digiday reports.

Publishers have a few different options. They can strengthen their own behavioral data (asking what stories someone likes to read or their household income bracket, for example) or they can serve up paid-for prompts from marketers querying whether readers have seen a particular movie trailer, say, or asking them to pick recognizable brands from a list.

But in-article surveys don’t have the scale or reliability to build custom audiences. Advertisers won’t trust a segment of self-identified survey-takers who claim they make hundreds of thousands of dollars per year, for instance.

Although that hasn’t stopped social ad tech companies, performance marketers and lead-gen prospectors from using Facebook and Google for their own survey data collection by paying for traffic to survey pages simply to repackage them as more lucrative audience segments. (Think “in-market for a mortgage” or “researching cardiovascular health.”)

That said, that data can have value, and advertisers would far prefer to get it from a news company than a bottom feeder seizing low-hanging fruit.

Brian Morrissey: Why conferences and events still matter. [The Rebooting]

Spotify’s CEO teases a major push into audiobooks to take on Amazon on its home turf. [Axios]