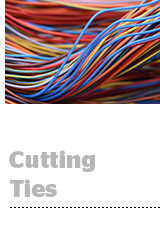 What happened to the cable bundle? While the reason people are dropping their cable subscriptions is obvious (they’re expensive, relative to streaming options), what’s less obvious is how the cord-cutting trend started, Bloomberg reports. Many blame Netflix, because talent and shareholders looking for an immediate payout pressured Hollywood execs and networks to license content to the up-and-comer. “All of the media companies got addicted to the crack cocaine of licensing to Netflix,” said Craig Moffett, analyst at MoffettNathanson. “It created a new window to sell shows, but it also created a monster.” Others blame Disney and other networks for spending an exorbitant amount on sports rights, for which they covered the costs with pricier cable packages. And others still point fingers at cable companies for refusing to provide channels on a cheaper, à-la-carte basis. More.

Private equity backers have acquired Dun & Bradstreet for $5.38 billion, and the company will be taken off the New York Stock Exchange, D&B announced this week. The price represents an 18% premium for shareholders, Reuters reports. D&B has historically (as in: dating back more than 170 years) operated consumer credit reporting services, but it recently shifted toward data-driven sales and marketing applications. The company’s B2B data products accounted for 40% of overall company revenue as of a year ago, then-CEO Bob Carrigan said on the AdExchanger Talks podcast. More.

Marketers are upping their investments in identity solutions. (Duh?) Over the past year, 58% of US brands have earmarked more budget for audience identity, while 47% plan to start spending more soon, according to a study released Thursday by the Association of National Advertisers and Winterberry Group. But don’t get too excited about a great awakening: Only 15% of advertisers can identify their audiences with accuracy and consistency. The majority (69%) are still in the early innings. Today, most marketers use their identity solutions, if they have them, for audience segmentation and targeting. Advertisers are still hampered by fragmentation, the increasingly twisted customer journey and the specter of regulation. Even so, they’re jazzed about expanding their identity tech repertoire, particularly on the CDP front.

Despite doom and gloom in the agency sector, not all holding companies are struggling to grow. Dentsu reported 5.9% organic growth in Q2 for its fourth consecutive quarter. For the first half of the year, revenue, minus the cost of sales, grew 7.6% to roughly $4 billion, while organic growth increased 4%. Dentsu Aegis Network, Dentsu’s international group, grew organically by 4.5% in Q2 and 3.4% in the first half of the year. Read the release. Despite solid growth, Dentsu, like its peers, needs a restructure. On Thursday, the company announced a reorganization of its group to enable more collaboration between Dentsu Aegis Network and broader Dentsu, which is slated to be completed by 2020. “It has become essential to establish a governance structure that is not restricted by the current framework of each operating company and enables expeditious decision-making from a medium- and long-term perspective, taking into account the group as a whole,” the company wrote in a release. Read it.