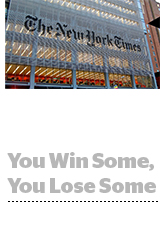 Subs Up, Ads Down

Digital ad revenue at The New York Times has declined 7.5% in Q2 from the year before. The paper said its “Trump Bump” last year inflated results, and it accounts for the decline in ad revenue. Readership grew, however, and 109,000 more people signed up for a digital subscription to the newspaper, for a total of 2.9 million digital subscriptions and 3.8 million subscribers across print and digital. More than two-thirds of the NYT’s revenue comes from subscriptions, The Wrap reports. Bright spots in the second quarter include improvements in new subscriber retention rates and the performance of Wirecutter, the product review website the Times bought in 2016, which helped drive 22% growth for the paper’s “other” revenues category. Read more.

Heard This Story Before …

Ripping off Snapchat Stories may be the most lucrative decision Instagram – and Facebook – has ever made. The Instagram format has 400 million daily users, more than twice Snap’s entire user base. Thirty-one percent of Instagram users watch Stories every month, up 21% from the year before, and 47% of users watch Stories every week. Engagement with Instagram Stories is driving overall use of the app, which was up to more than 53 minutes per day in June on Android, according to SimilarWeb. Although advertisers are still figuring out how to navigate the vertical video format, Instagram hopes the popularity of Stories will eventually help drive TV budgets to IGTV, writes Kurt Wagner at Recode. Whether that actually happens remains to be seen, but what’s clear is that Instagram’s aggressive copycatting is bad news for Snap, which was down 3 million daily active users in Q2. More.

Jeffrey Katzenberg and Meg Whitman raised $1 billion for a new mobile video streaming platform, NewTV, on Tuesday. But can they succeed where so many others have failed? Business Insider’s Mike Shields chronicles the many short-form streaming video busts from serious players, including ABC, Microsoft and Verizon, which took a $685 million write-down on its Go90 streaming entertainment service in July. There’s an argument to be made that consumers aren’t interested in this type of content. Even Facebook, with its more than 2 billion users, is having trouble getting picked up for its Watch content hub. “To launch new shows, a new app and a new viewing pattern? That’s an awfully tall order, even backed by a billion bucks,” Shields writes.