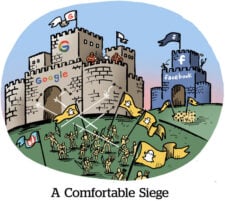 It’s worth reading at length, but a Q&A between Ben Thompson of Stratechery and Eric Seufert, writer of Mobile Dev Memo, elaborates on platform advertising dynamics, particularly for self-attributing networks like Facebook, Snapchat and Apple.

Will ATT and Apple’s privacy policies prove more damaging than expected to platforms like Facebook or Twitter? According to Seufert, “Instead of the brute force guerilla ‘collect all the data and attach it to a user’ approach,” self-attributing networks will move to “more sophisticated and technically demanding statistical and probabilistic approaches.”

Another question: Will content fortresses (’roided-up walled gardens) consume online advertising? More content could shift to the open web, Seufert said. “Maybe this just reshapes our relationship with content and reshapes the things that we interact with on our phones and elsewhere. It’s also a very exciting time because just these ideas that we held as absolute have been shattered.”

Relatively low year-over-year growth rates can be misleading, especially because huge businesses grow more slowly even while adding billions of top-line growth. But in this case, the broadcasters have no such excuse to fall back on. They’d be middle of the pack compared to digital-first rivals.

The latest tool in the influencer monetization toolkit may be … VC investment? YouTube creator Marina Mogilko, who built four channels – a Silicon Valley-based lifestyle channel under her name, plus separate language-learning accounts – recently took a $1.7 million funding guarantee in exchange for 5% of her future revenue on the platform, Insider reports.

The VC firm Slow Ventures is backing Mogilko and has $20 million from a recent fund earmarked for similar creator investments.

Creators often bring in diversified revenue similar to many traditional VC-backed startups, but instead they work off cash flow and have little to no back-end business, said Slow Ventures partner Sam Lessin.

The funding will help Mogilko focus on her content, she said, instead of being constantly beholden to sponsors and having sponsored content outweigh original content. “Google AdSense is a good stream of revenue, but I also have to take a lot of partnership deals in order to sustain a stable revenue stream,” Mogilko said. “That takes a lot of creativity away.”

TikTok is on TV screens now. Is it still TikTok? [WSJ]

For publishers, the post-cookie world is an opportunity to get the upper hand. [Digiday]

America loves choices. But not when it comes to phones. [NYT]