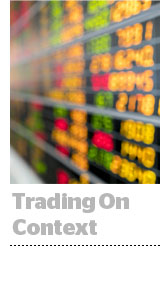 Even as many advertisers embrace audience-based buying, context remains a key performance driver in many verticals.

Take finance, a category in which advertisers often sell sophisticated products to niche audiences. Third-party data can be expensive, with iffy quality, so it’s often better to reach audiences while they’re reading about finance and business.

Dianomi, a profitable native ad platform for financial services advertisers, knows the power of context for its platform. It has tested ads on non-finance and non-business sections of publishers’ websites, with poor results.

“As soon as you go out of a contextually relevant environment, conversions drop dramatically,” “said Dianomi co-founder and CEO Rupert Hodson.

But the company has not soured on audience buying.

On the contrary, over the past two years it has built a data management platform (DMP), which it rolled out this summer. The DMP will enrich the targeting and insights that can be applied to its platform. And Dianomi is exploring letting advertisers use audience data from its DMP to buy inventory programmatically across the web.

Dianomi works with a 300-strong network of publishers in the finance and business verticals. They add Taboola/Outbrain-style native ad units, which advertisers pay for using a cost-per-click model. Dianomi claims to serve 4 billion of these ads a month.

For advertisers, Dianomi says it offers a more brand-safe environment for content than Taboola or Outbrain, as well as contextual relevance.

“Running on financial websites like CNBC or The Street closes the aperture on the opportunity,” noted Joe Soriano, group media director at GRP Media, who uses Dianomi for two financial services clients. “There is minimal waste toward people who might not understand [the client’s financial products].”

Dianomi also offers its clients network transparency. Advertisers can access a full site list and see publisher-by-publisher performance, and they can whitelist or blacklist sites, critical for advertisers who want brand-safety assurances.

The DMP will allow advertisers to look at performance through the lens of content, not just on a publisher-by-publisher or user-by-user basis. Its content insights feature reveals trending stories across Dianomi’s 300 publishers, which advertisers can use to improve creative.

“We will find out what people are latching onto, and serve them something relevant to the topic,” Hodson said.

Also, advertisers can use LiveRamp to bring in third-party data sets and, soon, their own first-party data.

Although Dianomi has just 30 employees, the network built its own DMP so it could lower costs and customize the product to suit the network’s needs, according to CTO Cabell de Marcellus. Building it in-house ended up being one-third the cost of licensing.

By building its own tech, Dianomi also doesn’t worry about data leakage. It can ensure its tags load quickly to minimize latency on its publisher partners’ sites. And it can create more flexible targeting products than if it used an out-of-the-box solution.

Dianomi is running audience targeting and analysis within its network, though it may eventually make the audience data available for private marketplaces.

“The DMP will open us up to the programmatic space down the line,” Hodson said. But Dianomi will make sure its publishers profit, too, since the network would build on their reader data. “We would need to look at creating private marketplace deals where the publisher is part of that, and there are various ways to do that. It’s extremely early days.”