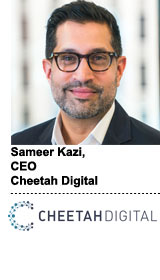 If the name sounds familiar, it’s because the stack now known as Cheetah Digital includes the first-gen email marketing platform CheetahMail – which has been around for two decades.

Cheetah Digital also comprises professional services, Mail Publisher (which provides email services) and the Experian Marketing Suite (a campaign management and analytics platform built out of the acquisition of Conversen).

While the suite sounds good on paper, Cheetah Digital has a big task ahead: modernize.

Many legacy email and marketing automation systems Experian competes with, like Marketo, have had to hit reset on their infrastructure to meet new marketer demands.

Kazi is an ExactTarget (Salesforce) alum and is responsible for executing the company’s go-to-market strategy, as well as growing its enterprise client base. (ExactTarget co-founder Peter McCormick is Cheetah Digital’s executive chairman.)

Cheetah Digital hopes to expand its partner strategy to be more interoperable with third-party tech platforms, such as DMPs.

Beyond that, it’s too early to say what else is on Cheetah Digital’s plate.

Could Vector, for instance, roll Cheetah Digital up with other tech in its investor’s portfolio, like Sizmek, which has a DSP, ad server and dynamic creative chops?

Kazi wouldn’t speculate on that. The immediate plan is for Cheetah Digital to operate as an independent marketing technology company.

“What I’ve experienced [from Vector] is they’re unafraid of doing a range of deals, both minority positions as well as buyouts, with the mindset of growth,” Kazi said. “We love the scope of the portfolio they have, but as of today, we haven’t had any discussions about how we might collaborate. But who knows what happens in the future?”

Now, the data companies are divesting their email platforms.

Acxiom sold its email solution to Zeta Interactive, Teradata ditched eCircle and the rest of its marketing stack and Experian, of course, sold the majority of its cross-channel suite to Vector.

“I think we’re going through a cycle now where the first set of players have owned assets long enough that they’re going back to their core business and what drives value for shareholders,” Kazi said.