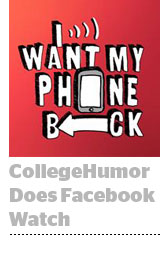 Most digital publishers are set up to make money through advertising, not by selling content. CollegeHumor operates with a different setup, which enabled it to quickly launch a hit Facebook Watch show.

Since its Facebook Watch show, “I Want My Phone Back,” launched four months ago, it has accumulated more than 370,000 followers. In the past 30 days, the show’s reach topped 12 million.

But the concept has actually been years in the making. Versions of the show first appeared on two other platforms before being adapted for Facebook Watch. The show was able to cycle through different versions in part because of CollegeHumor’s unusual corporate structure.

“A production studio is dependent on networks to release content,” said Shane Rahmani, EVP and GM of Electus Digital. “Since CollegeHumor creates a ton of content and distributes it directly, it opened up an opportunity for Big Breakfast to test, iterate and pilot concepts and graduate them onto other platforms.”

“We create branded content all the time for third parties, so it’s not a wholesale disruption of our business to create content for networks,” Rahmani said. “We can be nimble because we have the infrastructure, capacity and processes in place.”
Being nimble also allowed Electus Digital to find three different homes for “I Want My Phone Back.”

On the show, the host takes guests’ phones, sends embarrassing texts and social media posts and pranks their friends in exchange for money. It started out as an online video series created for Curve Fragrances a couple of years ago.

“It was a hit on the YouTube channel and immediately clocked 1 million views,” Rahmani said.

The show performed extremely well with an internal tool called VidIQ, which helps Electus analyze how likely the YouTube algorithm will recommend a video. CollegeHumor has more than 12 million subscribers (double Comedy Central’s), offering Electus a powerful launch pad for the branded content it creates.

After testing how the idea could be turned into a 30-minute TV show or 10-minute web series, Electus Digital sold the series to Comcast Watchable, a streaming video platform. When the OTT provider moved away from buying original content, Electus found a third platform to distribute the content: Facebook Watch.

Unlike most Facebook-publisher collaborations, which involve advertising revenue shares, the social network acts like a TV network with Facebook Watch, offering a fee in exchange for “hero” content, the platform’s name for its headline shows.

“Facebook Watch has been more of a studio-to-network-type relationship,” Rahmani said, “where we have delivered the content and partnered with them, but they have gone into their black box for how to get the content seen.”

As a result, publishers don’t have to focus as much on content optimization, whereas previously they may have dedicated effort to making content go viral on Facebook.

But they do have to make sure they can adapt to how Facebook Watch evolves.

“For publishers, [partnering to create content for platforms] is like building a business on top of a volcano,” Rahmani said. “You don’t know when it will change, erupt and turn into something different.”

“Facebook is in brand experimentation mode,” Rahmani said. “They want the optionality but not the obligation to pursue a ton of different paths. They are throwing different structures at [Watch] to see what’s best for the creator community, what results in the best content and the best content that engages the audience the most.”

For example, although Facebook pays creators, it isn’t aggressively monetizing their content. Ad load is low – it’s not unusual to watch multiple episodes on Watch without seeing an ad – but that’s consistent with Facebook’s long-stated strategy to put organic engagement before ad revenue.

So CollegeHumor is focusing on engagement too. The show ranks seventh in overall engagement.

The interaction rate for “I Want My Phone Back” stands at 9%. And 11% of all followers like, share or comment on content, one of the reasons why the show has already started its second season.