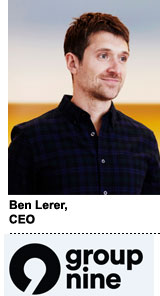 “This has been the best month in digital media since maybe the beginning,” said Group Nine Media CEO Ben Lerer. “The deals are great for the space. These are strong companies getting stronger and building enduring, lasting, profitable businesses.”

The all-stock deal for PopSugar brought the two companies’ combined value to $1 billion, with Group Nine accounting for two-thirds of that valuation. San Francisco-based PopSugar ran a profitable business that largely flew under the radar, Lerer said.

“PopSugar has not raised money since 2011,” Lerer said. “They only raised $41 million. They’ve been incredibly smart, efficient and tactical about how they built their business – which they don’t get close to getting credit for – because San Francisco is a tech market, and the great brand they built gets forgotten in media circles.”

With PopSugar already profitable, Group Nine Media wants the combined company to be profitable next year.

After the acquisition closes in 40 days, Brian and Lisa Sugar will join the executive team and iron out responsibilities. Each company has focused on diversifying revenue but with “complementary” investments and little duplication, Lerer said.

He spoke with AdExchanger Tuesday about the details of Group Nine Media’s future.

AdExchanger: How did this deal happen?

BEN LERER: I’ve known Brian and Lisa for probably a decade. In some ways we grew up in the industry together – PopSugar is 13 years old, and we are 15 years old. Founders [can] do a lot of posturing and are careful about how you talk about stuff. Earlier this year, we had a conversation where we laid our cards on the table, talked about what’s exciting to us. And things escalated from there.

When Thrillist became Group Nine Media, you went through the process of integrating multiple media properties. What did you learn as you prepare to go through this again?

Bringing four brands together is not for the faint of heart. We did some things right, some things wrong and we were naive about how fast or seamlessly things would be able to happen.

We are a much more mature, sophisticated company than we were three years ago. And PopSugar is a mature, thoughtful, experienced company. We have a lot of smart people solving for how to do an integration as seamlessly, painlessly, efficiently as possible. You can jam something in, or you can thoughtfully marry two businesses – and that’s what we are going to do.

Everyone’s paired off in the past month: Vox Media and New York Media and Vice and Refinery29. Is this deal similar to or different from those deals?

Broadly, we are all part of the same trend, from a maturing-of-digital-media perspective. Over the past one to two years, we saw a culling of our industry. The dozens of companies funded by venture money became a handful. That’s what happened in magazines, newspapers and radio, and it’s a natural, albeit somewhat painful, process.

This is a cool moment of maturation for the industry. When you entered this year, there was a general malaise and negativity around these companies. And you’ll enter 2020 with four companies that are very much on their way to – if not already – being profitable, and incredibly diversified from a revenue perspective. That’s a big deal.

Each of the deals have their own nuances. These are two companies that did not need to do this deal. We did this because we wanted to, and we merged our cap table and stock. This was not a conquest but because of a belief that we are in a very special point in digital media right now, where we are reaching the next level of maturity. This is not a winner-take-all market, never was going to be. We are getting down to four companies that will lead the industry. This deal cements Group Nine’s position.

What role will Brian and Lisa play, and will San Francisco remain a hub?

Brian and Lisa are going to have big, important roles in the company, and we’ve built a fun and effortless friendship and partnership already. What we are doing over the next month [until the deal closes] is a lot of the integration planning to operate as one company. We are not consuming, we are partnering.

What are you going to be prioritizing as you start to work together?

We [Group Nine Media] have done a really good job in terms of the content distribution business, with the Facebooks and YouTubes of the world, and building our studio. Similarly, PopSugar has been building out affiliate commerce, direct commerce, experiential with their festival PopSugar Play/Ground, and they are pioneers with brand licensing with PopSugar beauty. I’m excited about how complementary the businesses are in terms of where we have invested in growth and seen the biggest growth from diversification.

How will you work together in the core advertising business?

We have an amazingly low amount of cannibalization. We are strong with different clients in different categories. This is an exciting opportunity for us to massively expand the portfolio that each of us are deep with. For the size and scale of these companies, it’s just about as good as it gets from a complementary and lack-of-duplication perspective.

This deal was stock. Was there any kind of liquidity event involved, where people can buy a new home, that kind of thing?

I hope everyone likes their homes as they currently exist. This is not that moment. This is a “Let’s get stronger together, go create value together” type of deal, much like some of the other deals have been positioned. Ultimately, the competition is not between Vox, BuzzFeed, Vice, Group Nine, but with Google, with TV and Facebook. There were people questioning whether digital media would be a good and lasting business. And the answer is yes.

We will have control of our own destiny as a combined company. We will figure out where we want to invest and be more margin and cash-flow focused. I have zero question that we are going to pull this off.

So does this mean there’s a future for sustainable media companies?

There is a future for thriving media companies.