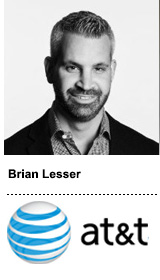 Brian Lesser, CEO of GroupM North America, will leave the company for a role at AT&T, the WPP-owned media buying giant announced on Friday.

“Brian has been a key contributor to 24/7, Xaxis and most recently GroupM, and we are sorry to see him go, but wish him every success in his new role,” GroupM said in a statement. “We will immediately start the search for a replacement.”

At AT&T, Lesser will be CEO of a new business unit tasked with building an advertising and analytics platform for the data and content assets the company will acquire from its pending deal with Time Warner.

“Brian is a terrific executive and one of the best there is in harnessing technology and data to create targeted advertising,” said AT&T Chairman and CEO Randall Stephenson in a release. “Once we complete our acquisition of Time Warner Inc., we believe there is an opportunity to build an automated advertising platform that can do for premium video and TV advertising what the search and social media companies have done for digital advertising.”

While GroupM looks for that replacement, global CEO Kelly Clark will fill in for Lesser’s responsibilities, GroupM said.

But Lesser will be tough to replace.

Promoted to CEO of GroupM NA in 2015, Lesser was the founder and CEO of Xaxis, GroupM’s programmatic buying unit. As CEO of Xaxis, Lesser grew the unit to $1 billion in revenue in five years. Xaxis was born from 24/7 Real Media, one of the first programmatic ad tech firms acquired by GroupM in 2007, where Lesser was VP of product management.

With Lesser, AT&T gains a unique executive with expertise in both media and technology. During his time at Xaxis, Lesser oversaw the building and deployment of $25 million data-management platform Turbine, which has been rolled out as part of a central data and technology stack for GroupM agencies.

The loss is particularly tough for GroupM, which lost the telecom’s roughly $3 billion account when it consolidated with Omnicom last year.

Lesser also sits on the board of AppNexus, of which AT&T is a client.