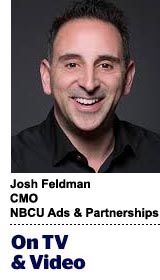 On March 22, NBCU will host a one-hour event devoted to its One Platform initiative, which had its official debut during 2020’s pre-COVID Consumer and Electronics Show. But One Platform relies on tech partners to maximize its capabilities for advertisers, so as with I/O and F8, NBCU wants to gather developers to let them know how the platform works and how it can be customized.

It’s a little unusual, because this sort of conference – it’ll have to be online this year, of course – is usually the purview of big tech companies. But, if anything, the fact that ONE21 exists at all underscores how the worlds of traditional broadcast and digital advertising continue to merge.

It also demonstrates how in this new world, NBCU is dead set on maintaining control of how its inventory is bought and sold. NBCU clearlt doesn’t want to find itself in a similar situation to the one other publishers experienced  during the early days of programmatic when ad tech middlemen stepped in to sell their inventory – and disconnect them from their audience.

AdExchanger spoke with Josh Feldman, CMO of NBCU’s advertising and partnerships division about the broadcaster’s bid to reach developers.

AdExchanger: What exactly is ONE21 and how does it compare to what Facebook does with F8 or what Google does with I/O?


JOSH FELDMAN: We’re looking to create a completely new event for us. For the first time, we want to dive into the platform/developer space, [and] we’ll do it the way NBCU can do it. Content, world-class entertainment and storytelling, but with the solutions-oriented focus of a developer conference.

We’re looking to give people a full roadmap of what we’re doing and we’re really embracing a build-together mentality.

But it’s unusual to see a traditional broadcaster hosting a developer conference. What kind of role will developers have within the One Platform initiative?

Look at the audience who we’ll be speaking to – that’ll help bring it to life. Going beyond our traditional clients – advertisers, media agencies, planning agencies, creative agencies – look at who we partner with to build out our capabilities. Salesforce, Operative, Adobe, FreeWheel. Look at the commerce partners we’ve brought into our business over the past year, [including the] retailers in our marketplace, the payment platforms we’ve done partnerships with and our measurement partners, like Data Plus Math or 4C.

[One Platform] is not something you take off the shelf and it’s one-size-fits-all. The way a client enters the partnership with us and One Platform is very customizable.

What does that customizability entail?

It’s a little too early to talk about that.

You mention FreeWheel, NBCU’s sister company. Will it have a special role?

We’re in the middle of creating our run of shows, so I can’t say exactly which companies will show up. We’re still figuring out the overall structure of this event.

Are developers going to develop apps on top of One Platform, sort of like how they work with Salesforce?

It’s a possibility down the road, absolutely. We’re trying to open up everything we’re doing as as resource to our clients to build things together.

Is ONE21 like an upfront? Can you reserve inventory?

It’s not. This is not an upfront. I’m not saying that in a negative way – the upfront has its own purpose, We will have programming updates later in the year.

You guys announced OnePlatform at CES last year and made further announcements as the debut got closer. So, what’s new?

There will be big technology announcements and investments that we make to further upstream our technology to help clients. It’s going to be a peek under the hood of our major data initiatives. We’ll talk about our digital capabilities and digital partnerships. We’ll be giving a future of commerce update.

When we launched One Platform at CES last year, we knew this would be the future of where advertising needed to move. 2020 just accelerated that need.

We plan on making this an annual event. There will be ONE22 next year and ONE23 after that.