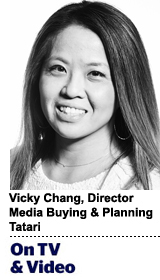 Today’s column is written by Vicky Chang, director of media buying and planning at Tatari.

The TV industry was undergoing a sea change before the pandemic. Now, the future is even less clear.

Viewership is up, but it’s buoyed by streaming. The upfronts went online. And now P&G has announced that it will skip next year’s upfronts altogether.

P&G’s move is dictated by a desire for more direct deals with independent networks, as well as a belief by Chief Brand Officer Marc Pritchard that the upfront event gives the leverage to networks and agencies, forcing advertisers to pay inflated prices even as ratings decline.

To some, Pritchard’s words could be seen as the death of the upfronts. If one of the country’s largest advertisers isn’t going to participate, what’s the point of all the glitz and glamor? The other interpretation is that P&G isn’t giving up on traditional buying methods at all. Rather, it just wants to play by its own rules.

Fortunately, other advertisers can play by those same rules without being P&G or investing at that same level.

Avoiding the upfronts in name only

Let’s start with the first part of Pritchard’s stated intent: to make more direct network buys. Currently, there are not enough independent networks to give a brand of P&G’s size the scale it needs. Independent networks are also being swallowed up into larger holding companies.

It’s more likely that Pritchard’s sensationalism is designed to scare networks into offering more flexibility and transparency, and to put greater controls on CPM increases. Networks dictate how they are going to sell their inventory and how much they need to get for it.

P&G’s favor for direct deals also lessens its reliance on agencies. While the company insists that media agencies are still a part of its plans, it’s clear that P&G wants leverage in TV media negotiations.

P&G makes its own rules anyway, and if it pushes upfront terms, networks will listen. It’s likely it’ll still make upfront deals, provided it gets the insight Pritchard is advocating for. It may just look a little different than the annual gathering of the TV industry, and P&G may call it something else.

No big deal for smart advertisers

P&G may have the leverage to make its own rules for TV buys, but that doesn’t mean that other advertisers can’t follow some of the same practices. In fact, some upstart brands are already doing it, possibly taking market share away from P&G.

The “information asymmetry” that Pritchard mentions – where media buyers have a better view of the data – has been swinging back toward the marketer for a while. Greater measurement and more agile buying are helping smaller, leaner operations access TV media, especially in the DTC space. If viewership is down but media rates are up, advertisers don’t need to grit their teeth and make a buy. They can simply walk away and go a different route to access the audience, whether that’s through a streaming platform or a programmatic buy.

The other piece of this is that advertisers can’t do without agencies. P&G has been slowly moving away from using agencies in a traditional media-buying sense, but that doesn’t make them disposable. Brands still need the added value that these agencies provide, but they don’t need help executing deals. They need partners that can help with measurement so that they can solve issues of frequency capping, inventory pricing and bridging an increasingly fragmented TV market.

For many ad buyers, P&G’s move away from the upfronts is simply an acknowledgement that one of the biggest marketers in the country is catching on to what more nimble brands are already doing. For agency holding companies, it might be the final wake-up call they need to push forward with an evolution from buyers to bridges, able to help brands fill in the gaps on their media buys across all channels.