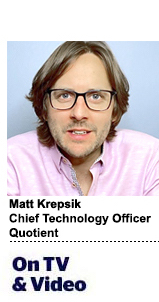 Proponents of addressable TV call it the future of advertising – a world where marketers can better target their audience and lean on hard data to inform their marketing plans. It’s a wonderful theory, but the reality is a bit less rosy.

Despite big promises, addressable TV is still a product that’s very much in its infancy. And there’s still a long, long way to go from using advertising addressable TV as a brand-building asset to relying on it to sell products.

Not only does this evolution require a deeper, more nuanced understanding of how addressable truly works, but it also calls for smarter data.

Addressable TV has long been in the works. The spray-and-pray advertising model of classic linear TV showed its age as the internet matured. Case in point: You could look at age and gender to guess who was watching, but you never knew for sure.

The evolution of data-driven addressable linear tries to build on this legacy foundation of age and gender by overlaying audience-based attributes from the digital ecosystem. However, the irony of this approach is that it does not allow brands to uniquely reach their customers. It just highlights the size of the total viewing population, which might not fully fall within their audience definition, and gives the illusion of addressability.

Furthermore, there’s no way to tell if the person watching the TV ad was actively engaged, the consumer you want, their spouse or child – or, in the event a TV is left playing in an empty room, perhaps even their dog or houseplant.

The real promise in addressable TV is in the over-the-top (OTT) space. Because the service is connected to the internet, OTT ads can be stored on the cloud or servers, making an unlimited number available. But even as OTT ads become more targeted, content providers don’t always have the best concept of pacing. As a result, consumers might see the same TV advertisement several times in a row, resulting in oversaturation and wasted marketing budgets. Worse, because these services are all privatized, there are no centralized exchanges to minimize the frequency.

Data isn’t enough; it has to be smart

What will it take for addressable TV to reach its full potential? For now, advocates of addressable TV maintain their recommendations are based on big data taken from viewers’ individual actions. What they won’t tell you is the TV viewership data they’re studying is probably not smart data. And that’s the missing piece.

With addressable TV, there’s no way to know who’s watching the screen – even with different profiles set up on services. During the pandemic, co-viewing rose above 40%. This certainly increases the audience size, but it also raises questions around who’s watching versus who brands are trying to reach.

The hype around this relatively new form of marketing is not entirely misplaced. Audience targeting in the TV space has certainly improved in recent years, but it’s important to not confuse vision with reality. There’s still a long way to go before TV is fully – or even actively – addressable. And some brand categories are better suited for addressable advertising than others (specifically, those that have a crystal-clear definition of their consumer audience).

The path to addressability is paved with smart data

Television is only one tool in the toolbox, and it’s a pretty blunt instrument at that. To convince a consumer to take action, you need to give them additional follow-up actions. Whether that’s pulling out their phone, finding a website or going to a store, doing this effectively requires a level of context that isn’t currently available or accurately tracked in today’s TV landscape. Right now, even at its most effective, addressable TV is about brand building.

So, the big question is: Can addressable TV overcome the TV and spur consumers into real-world action? The answer remains to be seen.