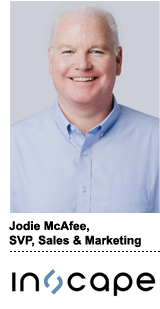 Jodie McAfee, SVP of sales and marketing at Vizio-owned Inscape, likes to stay “within whispering distance” of the engineering team.

“I don’t ever want to be out there promising what I can’t deliver,” said McAfee, who joined Vizio in 2015 after more than four years helping build Samsung’s ad platform.

But that doesn’t stop the vaporware from proliferating, he said. Advanced TV is the new hotness, and lots of companies are trying to hitch themselves to its star.

From the advertiser’s perspective, it can all get a bit confusing, particularly if there aren’t any clear-cut standards to help navigate the newness.

Inscape, Vizio’s data and ACR unit, is developing the underlying technology. When the standard is ready, which could be as soon as the end of 2019 or early 2020, Vizio will deploy it across its footprint of around 10.5 million smart TVs.

“Anything new requires change, and change can be painful,” McAfee said. “If you don’t help educate on the value prop and create ease of execution, your adoption will be nonexistent.”

AdExchanger caught up with McAfee about Project OAR, why Inscape doesn’t sell services and what he learned from Vizio’s tussle with the FTC.

AdExchanger: Advanced TV: What inning are we in?

JODIE MCAFEE: I’d say the top of the third, and I’m not sure if we’ll get out of the third in my lifetime. I don’t mean that pessimistically, though. The changes we’re seeing in this space are so dramatic, swift and constant that every time you think you’re going to get out of the third, something about the market changes – and that includes consumer behavior.

Is that why CTV data is so fragmented?

TV is no longer just that box, there’s an entire video ecosystem. It’s not news that people are watching more video than ever and across multiple devices. That shift in consumer behavior is driving angst, disruption and also innovation as everyone tries to quickly find their new spot in the value chain.

OAR is a prime example. Traditional players are trying to figure out where and how to compete in an increasingly digital world.

The ad industry loves consortiums. Why will Project OAR be the one with the standard that sticks?

Because it’s an open standard. We don’t believe there will necessarily be one single measurement solution, and so we’re creating a spec for the group that will be published and shared with all of the usual suspects. If one member of the group wants to use Comscore or Nielsen or our data in conjunction with iSpot, that’s all fine.

We know that most of our members already have preferred vendors for things like ad serving and decisioning. Obviously, NBCU isn’t going to jettison FreeWheel and adopt another stack. The members tell us where to go and what they want to do. We respond accordingly.

What were the main motivators behind getting OAR off the ground?

One, we felt strongly that dynamic ad insertion would never be successful at scale without a direct relationship between the publisher and the OEM. We also felt strongly that while others seem to consider the path to scale to be a single solution, we think the answer is flexibility. And whatever the standard ends up being, it needs to be flexible enough so that if one inventory owner needs to plug it into Xandr and another needs to plug it into Google, or wherever, it can be done.

Coming to market with an end-to-end stack and telling everyone they need to adopt it – that isn’t going to work.

Another of our underlying principles is the concept that a rising tide lifts all boats. We care about monetizing our own smart TV footprint, but if Amazon, Sony or Samsung also adopts this capability for their footprint, it would increase the value of everyone’s glass.

Do you need Samsung in particular to join for the OAR standard to really gain traction?

Need might be a strong word, but Samsung does have the largest footprint of smart TVs in the market, and scale is critical to addressable execution. More TVs means more eyeballs. If you asked me to prioritize the addition of a member from an OEM perspective, Samsung is of course at the top of the list, because our scale would increase exponentially the day they join.

Of the companies with chips embedded in smart TVs, only you and Gracenote license your data to others. Why not keep your ACR data to yourself?

There are a number of players in the ACR space, but when you get past the acronym, there are many differences in how we each operate our business.

The main one is that we are not a media sales organization, like Samsung, and we don’t sell targeting, measurement or analytics services, like Samba and Alphonso. We purposely decided to be a data licensing organization, full stop, because that opened up an opportunity to have dozens of channel partners. We’ve had internal debates about becoming a services company but the landscape is chaotic enough.

The ad tech space will be in a constant state of flux over the next three to five years, and if and when the dust does settle, whoever is left standing will need data. So, why jump into the middle of that rodeo when we can sit back and continue to license data?

How has life changed since the FTC settlement in 2017?

There was no joy in being the first smart TV manufacturer put under the FTC’s magnifying glass, but it ended up being a benefit. When we got to the sunny side, we’d basically adopted what is now the standard in the marketplace. We know that now we’re fully compliant.