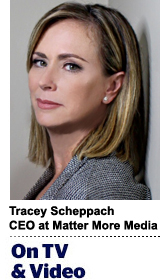 Buckle up. We’re about to get nerdy about tech and addressable TV – which should interest you if you like scale, and progress and profitable new markets.

First, advertising is a scale game, and if current initiatives prove successful, we can scale addressable TV from currently 3% of linear impressions to more than 50% – and it will continue growing. When you add that to the already addressable OTT, CTV and streaming viewing, more than 70% of total TV impressions are addressable-capable.

Project OAR is deploying solutions on Vizio TV and has lined up seven national programmers to participate in its beta trials, including AMC, Discovery, Disney, FOX, NBCUniversal, Viacom CBS and WarnerMedia, which collectively represent approximately 80% of linear viewership.

There is also considerable effort to scale addressable TV using set-top boxes. This is being spearheaded by companies with years of experience making the technology work on distributor-controlled inventory, led by the Comcast ON initiative and others, including most if not all of the previously mentioned programmers.

To decide how to scale, we need a scorecard by which to envision and judge success.

Footprint and interoperability of addressable technologies, as well as universal measurement, will be vital to getting this right. But right now the focus needs to be on which technology can scale in the most effective and affordable way.

To grade a beta, I suggest considering a conversion funnel as a step-by-step approach to evaluating technology. The funnel illustrates how many addressable impressions a TV programmer will yield and how many will be available to advertisers based on several factors.

The funnel layers are as follows: 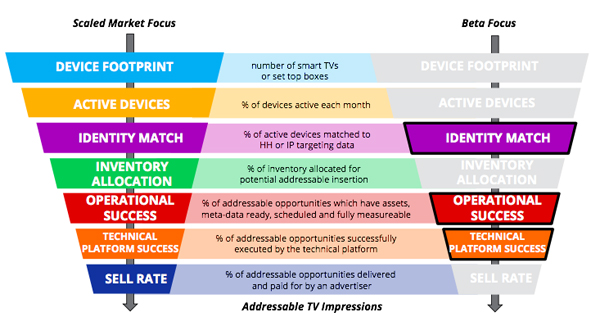 In the beta phase, some parts of this funnel are far more important than others. I believe device footprint (how many of devices are available), active devices (percentage of the device footprint actively used in a month), inventory allocation (percentage of inventory allocated for addressable insertion) and sell rate (percentage of addressable opportunities delivered and paid for by an advertiser) are not critical to focus on now. If the other factors in the funnel are successful, then more devices will be deployed on more TV sets that are more frequently viewed, programmers will allocate more inventory and advertisers will buy more.

Simply put, the other parts of the funnel have to work well before anyone can really scale solutions.

It’s time we agree to grade technical solutions and on what solutions will make the grade. The good news is: We have a lens for evaluation – through the funnel – and criteria for victory.

The most critical item to evaluate is the match rate of the addressable device to an identity source, followed by understanding of who in the household is actually watching the ad.

The historical way of conducting matches: Taking a set-top box that can be identified to a subscriber ID and household address and appending other data sets that are also household address-based. This method yields a variable rate but fairly high match rate.

The matching of IP-generating devices such as a smart TVs to other data sets that are primarily household address-based is trickier. IP addresses are not deterministic and require complex householding algorithms, leading to potentially lower match rates, although this can be mitigated by working with an identity partner withs a representative census-level set of IP addresses against which to match.

What can be done to improve these rates, and are they sound? The other item that warrants consideration is whether any of these betas are making progress on actually knowing who in the household is watching.

Programmers have many things to consider when comparing different platforms. There’s variation in the level of functionality provided by each platform. Some platforms are simplistic, with limited functionality beyond the ability to mark specific linear ads to be replaced and serve that ad. Other platforms are much more feature-rich, providing programmers with more flexibility and control over which ads are replaced under which conditions and an automated process.

For onboarding, programmers need to understand how much effort is required to enable addressable TV. How difficult is a platform? How time consuming? Are there items that must be integrated into the solution that could create points of failure and added risk?

There are wide variations in platform performance due to:

Although not critical in the beta, solutions must have a strategy and provide a plan to tackle measurement, reconciliation and interoperability.

Measurement and reconciliation: It is critical that we not only understand the transformed measurement of addressable campaigns but also how addressable ad insertion relates to the larger TV ecosystem and other media channels.

Things to consider: Is the measurement independent, trusted, people-based and cross-platform? Does the measurement process respect the underlying C3/C7 ad that was previously sold and is now partially covered up with addressable impressions? If not, the buyer may be paying too much or addressable inventory can’t scale.

Interoperability: Twenty years into the addressable TV journey, we know that significant incremental value has been created to improve already valuable TV advertising and there will not be one technical solution for all TV content. Solutions that get a passing grade in their respective betas will be prepared to interoperate with other solutions.

There is a lot to think about when participating in a beta, but this is a very exciting and critical point on our journey to improve TV advertising.

Knowing what to focus on, what questions to ask and how to evaluate solutions will be key to evolving TV to make it even more powerful. Start grading, then growing.