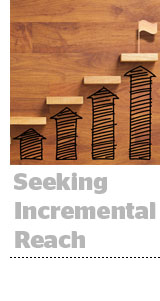 Using advanced TV to get incremental reach is all the rage among advertisers.

Dish Media is launching Reach Booster in January of next year. The product uses its addressable TV tech and data so linear TV buyers can drive incremental reach across the Dish and Sling TV footprint. Advertisers can also show additional ads to households that have seen the ad to optimize frequency to an advertiser’s desired level.

Roku and Xandr have also been touting their ability to add incremental reach with their advanced TV products. And it’s a key pitch behind for many CTV streaming services.Offering incremental reach solves a huge problem for linear TV buyers, who want to maximize reach at a low cost per rating point (which measures reach). They also want to avoid showing an ad to heavy TV viewers dozens of times in a quest to marginally improve reach.

In other words, simply buying more linear TV spots to drive reach would inundate regular TV viewers with the same TV ads they’d seen before. And only a handful of new viewers or light TV viewers would see the ad for the first time. The cost to get each incremental point of reach gets higher and higher.

Because of that dynamic, although Dish Media’s Reach Booster costs more than a linear TV buy, it can be more efficient. The product can surgically increase reach by showing ads only to new viewers.

For example, a CPG client working with Dish achieved 58% reach against its target households with its linear TV buy. But when it added Reach Booster, it increased reach to 86%, including 1.6 million completely new households.

In a second beta test this fall, a luxury automaker achieved a 46% reach with its linear TV buy. Showing ads across Dish and Sling homes increased reach to 74% of its target audience. And 1.6 million households saw the ad for the first time.

Reach Booster works by analyzing who has seen an ad mid-campaign. During the beta test, Dish looked at which households had seen the ad halfway through a six-week campaign. For the remainder of the campaign, it showed the ad to households who hadn’t seen it yet.

Reach Booster underscores how much of the new addressable TV tech isn’t focused on targeting people, but on optimizing or measuring TV ads. Roku and Xandr, for instance, have also been touting their ability to add incremental reach with their advanced TV products, and it’s a key pitch for many CTV streaming services.

“We’re most excited that we’re evolving the applications of addressable technology for something beyond targeted advertising,” Arrix said. “It shows that addressable tech is still in its early stages.”