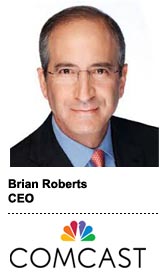 Comcast’s strategy has long been to invest in every area where customers get their entertainment or information, so that even if one line of business is affected by changing consumer preferences, another could benefit.

The following are items of interest gleaned from Comcast’s Q2 earnings call Thursday.

Comcast’s video business is feeling the heat from YouTube and Netflix.

“Video competition from virtual MVPDs remains challenging, driving a loss of 136,000 residential video customers and a 1.9% decline in video revenue in the quarter,” said Comcast CFO Michael Cavanagh during the call.

But Cavanagh seemed unfazed: “One of our strategies is to have diversification in such a way that as new technologies come, it’s not all or nothing – we’re benefiting more than we’re losing from that competition.”

“Why? Because video over the internet is more reliable and there are more bits per consumer and more bits per home. Those are great trends for us,” he said. “We’d like it all to be our bits, but if it’s not, that’s why we integrated Netflix and YouTube.”

Still fans of the tube


Roberts couldn’t predict what percentage of marketing budgets are going to digital, but he’s still bullish on TV advertising, noting that it’s the best medium for changing a person’s mind. Nothing on digital can compare, he said.

“We have over 20% of all the rating points in the US,” Roberts said. “[NBCUniversal advertising sales and client partnerships chief] Linda Yaccarino and the sales team [at NBCU] go to market and provide integrated solutions across all those markets. We have deals with Apple, AOL, BuzzFeed and Fox. That combination proves valuable despite the fact that Google and Facebook achieve gigantic ad sales.”

On Disney’s Hulu control and ending the bid for Fox

Roberts declined to comment about Disney’s impending control over Hulu.

He described Fox as a “unique opportunity” and said Comcast was “disciplined” in its approach.

“We thought it was mostly about international expansion opportunity,” Roberts said. “Ultimately, we pulled back because we thought we couldn’t build enough shareholder value by making the price at which it would be possible to buy it at, which was increasing.”

Comcast’s Xfinity X1 platform combines linear TV with content from third-party apps like YouTube or Netflix – basically, those pesky upstarts getting consumers to cut the cord.

And it’s deployed to 60% of Comcast cable customers.

That’s good news for Comcast, which has been intently focused on pushing X1 into more households in recent years. Doing so will nudge the company toward a more IP-based delivery system that can provide better and more data for advertisers.

How much cash did Comcast stack?