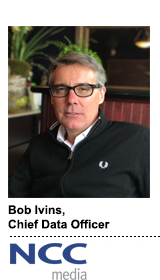 NCC Media, which is owned by Comcast, Charter and Cox Communications, started a division in April that focuses on building data-driven products. With Ivins overseeing data products for the buy and sell sides, NCC Media plans to move into the future at warp speed.

Bob Ivins joins NCC Media and its CEO Nicolle Pangis after holding executive positions at comScore, Mindshare, Comcast, Yahoo and Nielsen. He started in advertising back in the mid-1990s, developing digital measurement tools for a startup called I/PRO.

Ivins spoke with AdExchanger about his new role, the future of data-driven TV advertising and the deluge of new hire paperwork.

AdExchanger: What’s the first item on your list as chief of data?

BOB IVINS: To fill out the paperwork so I get paid. I have a stack of paperwork to get done.

How about once the paperwork is done?

I’d say locking down where our road map is and starting the sequence to get there in a timely fashion. Clearly NCC has been around for a while, they have a successful business and great board members. I think the hiring Nicolle’s done has [NCC board members] saying, “OK, we need to get you all on a different trajectory.” I feel anytime you want to go someplace, you need to know where you are and where you want to go.

I feel TV advertising needs to do a better job of being more addressable and accountable. If we take a look at the growth of online ad spend over the last 20 years, in ’95 it passed billboards, in ’99 it passed radio, in 2000-whatever it passed print and a year or so ago it passed TV.

I think TV was a little bit asleep at the switch. Even though we’re doing more now, I think we need to get more aggressive and provide the things that advertisers want like addressable and accountable. But we can also do a better job for consumers, too.

How do you plan on refocusing the team at NCC to make the company more data-driven?

Everybody in the TV space is moving toward being data-driven. If you take a look at NBC, the head of sales over there is talking all the time about data-informed advertising. And I think the entire industry is paying lip service – I don’t mean that as negative as it sounds – but they’re basically talking about it.

I think this is the year where we need to move it into actual plans. We need to get tools in the hands of the people that do the buying. We need to have better tools to optimize the sales. I think all these things that are so table stakes in the digital world need to be adopted in the TV world, and there’s a lot of investment going on in the ad tech space and we’ll be looking to either partner or lean in to a couple of these players to build out our stack.

Will you be part of NCC’s acquisition strategy?

I hope so. Certainly, on the data side of things, I want to have influence on other tech that we might acquire.

Speaking of tech, will part of your job involve building new products?

Yes. The products I’m most interested in are data products. How do we create a database that can inform the buy side of the business so that if I want to identify a certain demographic or certain behavioral characteristics, there are a lot of databases out there? Data is increasingly passively collected and available at scale in a timely fashion. Our job is to try and use that, whether that’s demo data or behavioral data about purchase or watching activity.

A digital product needs to be built on the front end, and then we need to build data products on the back end. How do we measure if something worked? I think we want to be looking at both sides of [any given] transaction and build data products that can help inform addressability and accountability for TV.

In terms of hiring, what are the skill sets you’re looking at? What are you hoping to find?

I’ve always said the same thing: bright, hungry people who want to make a contribution. I think at the end of the day, that’s what we need.

I had this conversation with my son a couple days ago. He wants to become a data scientist and I’m like, “Dude, data scientist is one thing. What is your passion?” You can be a data scientist in media, medicine, internet of things, on Wall Street, etc. I think we want people that are really comfortable with data, but people who are also passionate about solving the problems we want to solve for our customers. You can’t be just a data scientist. I want somebody who wants to use data to solve a problem that marketers have or that media owners have.

What’s the main challenge of NCC, in terms of a company that’s becoming more data-driven?

Timing is going to be important, and there is some legacy stuff in the industry. But I think that everyone gets that digital native people are influencing how TV is bought and sold. We’ve been slow to migrate to [TV], not because we didn’t see it coming; online advertising has grown pretty quickly over the last 20-something years to overtake billboards, radio, print and now TV.

You need to understand both digital and the legacy of TV.