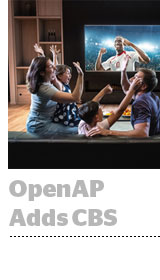 With CBS joining, OpenAP’s members together represent the majority of national TV ad spend, as well as 92% of all US audiences watching TV.

“We heard from buyers that they wanted to have the majority of revenue in OpenAP. We can now say that confidently,” said OpenAP CEO David Levy. “Adding CBS, with its network and reach, adds a huge amount of scale.”

The added scale will help the OpenAP marketplace, launched in October, gain further momentum. This quarter, more than 50 campaigns have run through its platform.

The OpenAP platform lets buyers share and find audience segments across all member networks, and then buy digital video, CTV and linear inventory against those audience needs.

“Prior to OpenAP, you had to build your audience with every network, build your campaign and execute your campaign,” Levy said “We are doing it across all the networks in one place.”

In 2020 OpenAP will improve that platform experience for buyers. It’s also trying to sell its platform to agencies to use to plan TV campaigns.

“You will see us align more closely with our clients, engage with them and be that central listening board for them across campaigns,” Levy said. “CBS and their portfolio and client relationships brings that along in a very powerful way.”

The addition of CBS has been in the works for some time. But with the impending merger with Viacom, a founding member of OpenAP, the company put its plans on hold until the deal was settled, Levy said.

Acquisitions have led to an ebb and flow of members: WarnerMedia left OpenAP after its AT&T acquisition. Its ad unit, Xandr, offers some similar functionalities to OpenAP.

And Disney, which owns ABC, has not yet joined, though the deal to merge with OpenAP member Fox closed in March. Discovery-Scripps is also not an OpenAP member. Levy continues to have “positive discussions” with the holdout networks.

CBS will also get an additional voice within OpenAP after joining. ViacomCBS’ Jo Ann Ross, President and CRO of domestic advertising sales, will join the board.