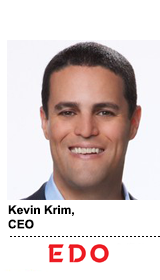 An actor, AI expert and the former head of digital at CNBC walk into a bar. They create an analytics startup. There’s no punchline here – that really happened. (Maybe not the bar part.)

AdExchanger caught up with the EDO’s CEO, Kevin Krim, to learn more about the company’s evolution.

AdExchanger: What’s the problem EDO is solving for?

KEVIN KRIM: I saw firsthand [at CNBC] that there were so many marketers who were doing brand marketing and didn’t control their data funnels because they were selling through distributors. This means Walmart, Amazon, Target and Walgreens had their customer engagement data and knew what they were considering purchasing around their product. But if you’re an automaker, your data is scattered around dozens of shopping sites and dealership networks. If you’re a movie marketer, your data is scattered around the ticket buying site and the movie theaters and a lot of it’s just going to offline. There’s this problem of understanding consumer behavior, which accounts for a big chunk of most people’s [linear TV] budgets.

For many of the [clients] we work with, well over half of their total marketing spend is on linear TV, yet all of their actionable data is on digital. It’s this conundrum – this paradox. We saw an opportunity to combine industry expertise from veterans on our team with some of the best engineering talent and try to apply advanced data science to huge data sets.

How are you creating the massive data sets you work with?

We use data from search engines and content sites that are reflective of consumer research, shopping behavior and certain social action. We don’t really care about social sentiment, but the fact you might invest energy in writing a long comment on a piece of content from a brand or product on Facebook or YouTube is what matters.

We pull all those data sources together, and at a very granular level, we create a composite signal of consumer intent for each product and brand that we’re concerned about.

Can you give me a ballpark estimate on how much data this entails?

Over the last three and a half years that we’ve been doing this very quietly with our ads. We’ve collected trillions of data points of consumer behavior from our sources. That covers over 2,100 products in about 80 categories and subcategories of advertising, from movies to autos to insurance to fast food. You name it, we collect all those data points.

And how does this tie back to TV?

We pull together every single ad that’s aired on national TV in the last three and a half years. We do that by having monitoring data centers on the east and west coast pulling all those broadcast and cable national feeds. We monitor 24/7, and through automatic content recognition.

We extract every commercial break in every individual commercial spot. We run a bunch of matching algorithms to find those ads and apply a bunch of metadata we either license or extract ourselves. Then we have a human review as well, and we create a database of every key gathering.

How many ads have you measured in total?

Who’s in your competitive set?

I don’t hear from many customers that we have a direct competitor. We just don’t. But we’re really trying to disrupt an old, survey-based methodology. If you visualize a marketing funnel, so much of TV measurement has been concentrated entirely on top of that funnel on exposure. And we’re saying there should be layers to your measurement and we’re catching this really critical middle layer of consumer engagement.

Then how is EDO different from Nielsen or comScore?

The kind of work that they’ve done over the last few years has been really focused on continuing to build out their understanding of exposure data, which is an understandable focus. It’s a real issue for them.

When I used to be at CNBC, we stopped using Nielsen for our Business Day ad sales. We stopped guaranteeing on Nielsen ratings because we had so much evidence that it was not capturing all the methods of consumption across screens. Out-of-home is the traditional issue Nielsen struggles with, where people are watching in offices in other venues that are outside their home. They also struggle with cross-screen, like mobile and OTT. They’ve done a lot of work over last few years to try to solve that, but they’ve been focused on that. They’re, in my view, completely neglecting the engagement layer of measurement.

Are you still in the building phase or is EDO up and running?

Absolutely. We’ve got a ton [of clients] on the buy side and the sell side. We’ve been working on this for a couple of years now. We just kept our heads down and have not done any kind of public sort of announcement on what we did, because we wanted to make sure we had a really strong business.

Can you give me some examples of your clients?

Some of our clients don’t let us talk about them. But we work very closely with every movie studio in Hollywood. Warner Brothers is a great and very sophisticated client. Paramount and Lionsgate are two very sophisticated users of our data on the buy side and on the sell side.

Is that how Ed Norton figures into all of this? Because, like, how did that happen?

There’s a connective thread through all of this. Daniel Nadler, who has a PhD from Harvard and is a real expert in machine learning applications for finance in the artificial intelligence community, founded a [machine learning] company called Kensho. Edward [Norton] was an investor. Generally speaking, he’s a very active entrepreneur and investor in addition to his filmmaking and acting career.

I led an investment [in Kensho] on behalf of Universal and Comcast. And so when Edward, Daniel and I started talking, we realized media and advertising in particular needed the application of advanced data science. And this was in 2015, out of an emerging realization that we had to start a company.

He’s one of the most authentic people and he’s incredibly real. He’s very intellectually curious. I love working with him.