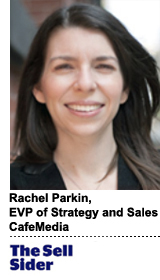 Today’s column is written by Rachel Parkin, executive vice president of strategy and sales at CafeMedia.

Upfronts and structured rate cards have long existed in advertising with the purpose of creating more value in partnerships between advertisers and publishers.

As ad buying increasingly shifts toward programmatic, taking legacy approaches to strategic partnerships is like mixing apples and oranges. Programmatic partnerships need a new design, and we haven’t landed on the right one yet.

The goal of partnerships between advertisers and publishers is simple: Everyone gets a benefit that they wouldn’t have otherwise received. Traditionally, advertisers sought better rates in exchange for higher spend commitments or added value.

These structures, however, haven’t translated to the fluidity of programmatic buying. Fixed rate-card discounts for spend tiers don’t provide flexible bidding strategies for advertisers. Increased advertiser spending doesn’t guarantee that publishers make more money either, because there’s an opportunity cost in not selling those impressions to a higher bidder.

Some supply-side platforms (SSPs) have started innovating on new programmatic implementations that build price reductions into the auction mechanism. Packaging discounts into real-time buying transactions is a good foundation to drive more value for advertisers. The challenge is these instruments bundle auction priority together with price reductions, making the economics for publishers less clear.

Looking more closely at how these deals impact publishers depends on the terms of the discount. The first consideration is whether discounts are part of a guaranteed spend commitment. Notwithstanding uncertainties in “guarantees” in and of themselves, tiered reductions for actual spend thresholds can accomplish the same goal.

Without a guaranteed spend commitment: Publishers trade off lower revenue in the hopes of increased spend.

With a guaranteed spend commitment: The outcome hinges on the CPM.

Hurting publishers is obviously not the intention, but combining price reductions and auction priority is like giving two discounts in one. Discounts and priority are two entirely different concepts and should be considered individual levers in building partnerships.

Stand-alone discounts: By unbundling priority, discounts for one advertiser do not hurt the ability for other advertisers to win as normal, minimizing publishers’ opportunity costs. Strategic partners can still get reduced prices but only win when they are the highest bid. This doesn’t necessarily lead to lower win rates because most publishers have significantly more inventory than they could possibly sell. In times like these, publishers seeing huge increases in traffic and depressed CPMs have a lot of excess inventory. Brand buyers with higher CPMs will have a strong enough win rate to fill demand, regardless of reduced prices, and lower-funnel CPM buyers don’t need priority to keep winning at discounted prices today.

Priority jumps: Auction priority jumps present a compelling alternative to create value for ROAS-focused advertisers, whose CPMs likely fall in line with open-market rates, during peak demand periods. In this case, advertisers pay the same amount as they bid but are treated as if they paid more in the auction. This helps advertisers spread their dollars further to win more of the impressions they want at lower prices. It also gives advertisers better access without giving them an absolute first look. And, advertisers should see more efficient CPAs as a result.

The agency brings its collective spend and bargaining power to the SSP, which results in a better take rate on behalf of publishers. This directs more of advertisers’ investments toward working capital, meaning their dollars go further. The SSP gets a higher share of the agency’s wallet, which pushes more dollars through its exchange with a lower revenue share. And, the publisher pays lower fees on the agency’s advertising. That makes it a win-win-win for all parties.

Another case of what might previously have been considered strange bedfellows are partnerships between publishers and DSPs, which bypass SSPs in the typical supply chain. These connections are also positive for advertisers, publishers and DSPs.

The DSP reduces take rates in the chain by removing a hop. Advertisers and agencies bidding through these connections gain higher win rates because more of their investment goes to working capital and fewer bids fall into the leaky cracks of the supply chain. Publishers pay a much lower fee – or even none – on direct DSP demand, and the DSP is able to increase inventory share on a premium publisher. Skipping a hop is also a win for all parties.

Unbundling the accounting for discounts and auction priority is a key part of making strategic programmatic partnerships work for advertisers and publishers. We might not know the right answer yet, but it’s not one size fits all.

Let’s listen to the goals and desired outcomes, approach the solution with flexibility and figure out the right way advertisers and publishers can create more value together.