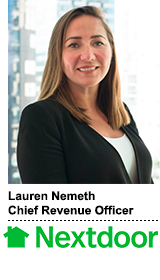 If you live in the United States, chances are you live in one of Nextdoor’s 190,000 active neighborhoods, which cover 90% of the country.

But many in the advertising business haven’t yet worked with Nextdoor, which started selling ads less than two years ago.

Leading that advertising push is Lauren Nemeth, a Google, AppNexus and Turn alumna. She became Nextdoor’s chief revenue officer a year ago and focuses on three lines of business: selling to national advertisers, real estate ads and a small business offering.

Nextdoor has connected national advertisers like Chrysler, Lowe’s and home security company Ring to neighbors across America. Home security, real estate and home improvement companies adopted the platform early, partly due to the match between the site’s context and its advertising.

Nextdoor’s advertising revenue tripled in the past year. In December 2018, it set up programmatic pipes to supplement its direct-to-advertiser businesses. It will only sell its inventory through private marketplaces.

Nextdoor also allows marketers to onboard data, offering a mimic to Facebook’s top performing Custom Audiences product. Nextdoor’s confidence in a user’s identity, however, goes one step beyond Facebook. Members must verify their address to confirm they live where they say they do.

The strength of Nextdoor’s data, however, could become a liability as consumers demand more privacy. Nextdoor matches addresses to home valuations and how long users have lived there to help its real estate business and advertisers – and users may consider that data to be sensitive.

When GDPR went into effect last year, Nextdoor proactively made its users stateside and abroad in the United Kingdom, Netherlands, Germany, France, Spain, Italy and Australia consent to its terms.

LAUREN NEMETH: Our plan is about genuinely explosive growth. We are almost doubling our entire member base in the next year. We will more than double our revenue numbers.

Our focus remains on building a differentiated ads business with delightful creative and super differentiated data in a way that’s frictionless for advertisers.

You’re a programmatic veteran. How does that inform your approach to building Nextdoor’s ad platform?

What I’ve brought to Nextdoor is frictionless buying for brands and advertisers. We’re making sure it’s easier, more data-driven and less operationally intensive.

No disrespect to programmatic, but there are a lot of things we can do better. Understanding the identity of actual users is critical and something that’s plagued programmatic for a long time. We verify every member in the platform. Call it old school, but we send postcards to people’s homes to make sure they actually live there. When we go to brands and agencies, we know our users aren’t bots and we know a lot about their local and household identity.

The other piece is context. In programmatic, it’s all about your data, and that’s how you value inventory. The context of the conversations you have on Nextdoor are not things you have everywhere on the internet. This is a private social network. You can’t hide from Sally who lives down the street, so it makes people respectful.

What kind of feedback are you getting from national advertisers about how you’re different from Facebook or Google?

The ability to drive better offline interactions because we can target where you live, not where you are at a moment in time, resonates with brands.

Local is that super valuable part of the media plan people don’t have great technology for today. We also build native placements that personalize neighborhood-level creative, that shows me an ad for the Lowe’s where I live, not where I am now. We do the heavy lifting to create an ad that talks about that specific Lowe’s and its general manager.

Do you build your own tech, or partner?

A lot of what we do today is homegrown. We built the dynamic, local ad. It’s a simplified line of native text, with variables that change based on context, like “Welcome to ____ Lowe’s! Meet your General Manager ____.” The same holds true of the creative and the landing page. There’s a lot we can do to templatize it.

We are open to working with third parties, and we want to make it easy to work with us. Whether it’s DCM [Google ad server] tracking, Moat, Integral Ad Science, you name it, there’s no friction.

You talk about local being a tough market to crack. MaxPoint had to go private. Yelp finds it challenging to compete against Google. Patch went through struggles. Where might Nextdoor be able to buck that trend?

The piece for local that’s so important is LTV [long-term value]. The LTV is better if users live in cross proximity to your location.

The second is the call to action. On some platforms, the call to action is, “Here’s a discount or offer, come in!” That’s different than, “I’m Lauren’s coffee shop, and I want to celebrate the win of a local soccer team and have everyone come in for a free pastry.” There are ways people create a reputation on the platform where it’s not an ad but a pillar of the community, and the call to action is more neighborhood-like.

With Nextdoor’s home identity, what could you do in ad measurement?

One thing Facebook does better than everyone is they have reach and frequency for days. As a result, they can wield the hand of brands and agencies to look at their way of doing attribution, offline measurement and closed loops.

Because we don’t have the same level of reach and frequency, it’s not something worth looking at separately. Our focus is working with brands’ third party of choice, to manage foot traffic, for example, with NinthDecimal.

We’re in this period of increased scrutiny of privacy. Nextdoor’s received scrutiny for posts that show racial profiling and fake posts. How do you think about this from the ads point of view?

We built our own search product that allows us to scrape less desirable content and tools we built alongside that. Second, every neighborhood has a lead that acts as a moderator.

We rely on leads to mediate those discussions, so whatever we put on Nextdoor is safe and respectful of every member of that community. People can also flag content. That immediately gets escalated to our ops team, who can look at the content and potentially remove it. We take this seriously.