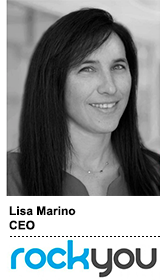 RockYou specializes in acquiring down-and-out digital properties and managing them through their decline.

The San Francisco-based company adopted that business model because it nearly went out of business itself in 2009, when Facebook decided it was done with social gaming apps on its platform. At the time, RockYou was a top social gaming app developer on Facebook.

“Our business went from $40 million to $15 million in revenue. It was catastrophic,” said RockYou CEO Lisa Marino, who was VP of sales at the time.

From that failure, it learned to diversify its traffic and revenue sources.

“Facebook absolutely needs to be part of your business, but it can’t be more than 20% to 25% of your revenue,” Marino said. “You have to change with it, and you can’t be so dependent on it that you are toast.”

In the decade since that realization, RockYou has acquired close to two dozen mobile gaming apps. It cut costs by moving all production to India and improved advertising revenue with programmatic video ads.

“We had a thesis the [digital media] market was getting very taxed and we would see consolidation in a big way,” Marino said.

RockYou bought LittleThings for an undisclosed amount after it was killed by Facebook’s algorithm changes in March. LittleThings’ revenue was $50,000 in April, when RockYou relaunched the site. This month, it’s on track to do $1 million.

“We want [an acquisition] to be cash-flow positive in 90 to 120 days. If we don’t believe we can get there, we don’t buy it,” Marino said. RockYou funds its acquisitions through a mix of cash, bank loans and investors.

Besides LittleThings, RockYou bought CafeMedia properties CafeMom, The Revelist, Mamas Latinas and Baby Name Wizard, 50-plus website Purple Clover and Mom.me this year. Marino isn’t done with her buying spree. RockYou is in active discussions with a handful of other media properties Marino hopes to buy by the end of the year.

After bringing together all these companies through acquisitions, RockYou aims to amass 50 million unique visitors in the female and moms category. “That’s when it gets interesting for advertisers,” Marino said.

The publications will focus on creating video content, but in a cost-effective way. RockYou is used to offshoring production work. US-based teams will come up with ideas for videos, and in some cases shoot them, and a Thailand-based team edits them to cut costs.

As RockYou enters its next chapter as a holding company for digital media properties, Marino talked to AdExchanger about how it’s applying the turnaround formula it honed in the gaming space.

AdExchanger: Why is your turnaround business model successful in gaming?

With programmatic, you achieve scale. We understood how to build game mechanics around video consumption and buy titles that were severely undermonetized and improve that meaningfully.

It’s also been a buyer’s market. Investors were no longer enamored by gaming, so we were able to acquire at aggressive rates, particularly from large companies that wanted to divest of non-strategic assets. It was a win for them and a win for us.

Why were you able to make all your acquisitions a success?

People thought social games would last three, six, 12 months. Well, we found they are lasting 10 years. We have a game, “Zoo World,” which will have its 10th anniversary in June. Once we understood how these “tails” worked – that they could be very easily quantified and eroded at a very specific rate – you overlay improved ad monetization and you extend the life of the title.

How does your expertise in monetizing video translate to the digital media acquisitions you’ve made?

The reason we made the bet on LittleThings was because they were video heavy. CafeMedia has little to no video, but we are figuring out how to put video into CafeMom. We are a quarter away from figuring that out, and beefing up their offerings and video distribution. Mom.me was better at video, but still not as strong as LittleThings.

The gaming app RockYou ran all programmatic ads. Can we expect that for your digital media properties?

CafeMedia was 60% programmatic and 40% direct. That’s the right mix. If you look at our advertising on a monthly basis, it’s programmatic heavy but getting more direct. We closed our first deal in Q4 that includes video on all our properties, including games.

Because we come from programmatic roots, we can find that balance that makes sense from a yield optimization perspective. On our games, if you add a handful of high-CPM campaigns to that programmatic experience, the incremental monetization you can get from those extra five campaigns you sold direct could be  15% to 20% more [revenue than purely doing programmatic].

Advertisers don’t want to be beholden to just Facebook and Google. They want more distinct experience, and [with our games] we can do unique things around distribution [of branded content].

How do you see the digital media ecosystem evolving, and where does RockYou fit in that ecosystem?

I look at us as reinvesting in digital media. We think it’s broken in a lot of ways, and you see that in the types of transactions getting done, and the investment that is or is not happening in the sector.

Our long-term vision is to have six to eight meaningful brands that can be at 15 to 20 million uniques a month, and to have those brands be profitable, with the right mix of revenue and traffic sources – to create one of the best branded and most sustainable digital media operations that exist today. That doesn’t exist today.