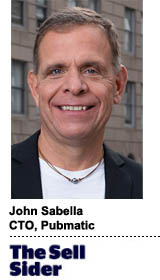 Today’s column is written by John Sabella, CTO at PubMatic.

With international scrutiny and stories about opaque pricing, Google could use some positive PR. Federated Learning of Cohorts 2.0 (what I’m dubbing FLoC2) presents a unique opportunity for Google to prove it’s working to level the playing field and cooperate with publishers and other tech companies.

Google is on the board of the IAB Tech Lab. It’s on this board, not at the World Wide Web Consortium (W3C), where Google will be able to generate the most traction and create the best collaboration when it comes to solving for identity without third-party cookies. Not only would such an approach improve Google’s positioning, but it could also increase uptake of the IAB Tech Lab’s approach and create a more coherent industry standard.

The IAB Tech Lab has been working on a common taxonomy, dubbed “Seller Defined Audiences,” that standardizes the various segments associated with groups of IDs that are emerging to replace third-party cookies.

The major Prebid players in the industry have also been hard at work creating infrastructure for audience segments, which are being pushed into IAB Tech Lab, called “First Party Segments.”

In both cases, collaboration is important. A single taxonomy will help buyers, sellers and technology companies communicate effectively, but it’s not the only thing that’s needed for IDs to be adopted – and effective – at scale.

Google’s second iteration of its FLoC proposal includes the semantics behind an audience segmentation taxonomy, which could be combined with the IAB’s efforts to create a unified approach.

Google has been looking to redevelop FLoC into a more audience-driven solution, though it’s unclear if FLoC2 will be the official name. The expectation is that this will be revealed before the end of the year.

But regardless of what Google names its new solution, the fact is that Google doesn’t have to play nice in terms of how the solution is designed – although they really should.

The IAB Tech Lab already has a relatively well-thought-out taxonomy for audience segments. The next piece of the puzzle to be addressed relates to the semantics of that taxonomy. There needs to be a common, accepted description of each name in the taxonomy.

For example, the “soccer moms” label needs to be defined so different stakeholders know what types of people actually count as “soccer moms” in that segment. This semantic description can include past behaviors, preferences, purchases or masked demographics. But it needs to be universal to work.

Here is exactly where Google should collaborate with the programmatic ecosystem as they build out FLoC2. While their first version didn’t pan out, their second version could help standardize the entire ID market across platforms and the open web.

FLoC was originally described as open source, which is a good thing. If Google’s new FLoC2 algorithm could be designed transparently, then everyone – buyers, sellers, platforms and tech companies – could have a single ID taxonomy solution for the industry.

For Google to provide transparency, it doesn’t need to give away its data. Nor do individual-level data points get compromised. Rather, Google simply needs to provide the semantics behind its own segments so that they can be shared across the industry.

The IAB Tech Lab has been coordinating with Prebid to ensure that the new taxonomy is open source and transparent. Google should align with Prebid as well.

FLoC2 will fly with the IAB

Having Google drive the new open standard would increase scale on FLoC2 and other segment-based grouping. Improved scale is a win-win-win for advertisers, Google and the industry.

A collaboration between Google and the IAB also keeps the process in the public domain and tightly reviewed by the whole industry. Open collaboration increases trust in both the IAB Tech Lab and Google’s approach. Perhaps best of all, it sets a new standard for collaborative transparency that pushes Prebid to the next level of maturity, setting the stage for a future wave of ID-based innovation.

Google would be clearly seen as working with the industry and with an industry body on which they have a board seat. Google, why not improve your standing as we figure out how to move away from third-party cookies? Don’t leave the industry hanging.