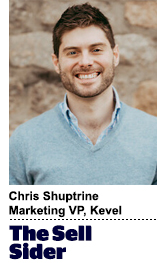 Today’s column is written by Chris Shuptrine, VP of marketing for Kevel.

This new feature will apparently send all emails opened with the Apple Mail app (regardless of what email service is used, like Gmail or Outlook) to a proxy server that will pre-load all content, including any impression or tracking pixels, according to Litmus.

This would make impression tracking Apple Mail users impossible. If you send an email to 100,000 of them, your pixel would fire 100,000 times, even if only 20,000 actually opened it. This impression data (aka number of opens) will effectively become unusable.

Of course, there are caveats here. For one, the program isn’t on by default. But rather than using a toggle hidden in settings, all users will get prompted upon opening the app to choose to either opt in or opt out of Mail Privacy Protection. Given the prompt’s focus on privacy and the fact that only 24% of users are agreeing to let apps track them when asked, it’s unlikely many people will select the “Don’t Protect Mail Activity” option.

Two, data show that the Apple Mail client accounted for 46% of email opens in 2020. It’s a lot but not the majority of opens. And three, Apple hasn’t officially released iOS 15, so it’s possible they delay MPP or make some changes that would soften the blow.

This update, nonetheless, will likely have a few major impacts:

This industry is prone to apocalyptic predictions, so I’ll be the first to say that email ad monetization is far from dead. We can still track the number of subscribers, clicks and actions tied to those clicks. Impression tracking, too, will still be available for more than 50% of recipients.

Publishers monetizing with email ads, however, should be aware of these changes and react accordingly. They should proactively discuss iOS 15 with their direct advertisers and how it may impact reporting and pricing.