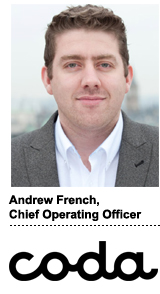 Game developers have a lot on their plate beyond developing games.

Coda’s platform already has thousands of global studios registered, most of which are relatively small one- to 20-person hypercasual gaming outfits. Coda’s platform helps them understand the market for their games and ideate concepts before jumping in, French said, which gives smaller developers a chance to compete in a hit-driven market.

“The publishing sector is very competitive right now,” he said. “But we have purview into multiple games, which gives us insight into which network partners give the best CPMs, for example, how to set up advertising rules, how many ads to serve per player and how often. We take care of that stuff so studios can just worry about building great games.”

Coda’s first game, a hypercasual title called Rope Rescue!, has generated more than 25 million installs since it launched in August 2019.

AdExchanger caught up with French from his home outside of Cambridge, England.

AdExchanger: What technology does Coda have?

ANDREW FRENCH: There are three parts to it: insights and testing, our SDK and actually publishing the game.

First, we have a platform that tracks gaming trends, including what’s growing, what’s hot, what type of game mechanics are working well for people. Recently, for example, we’ve seen a trend for games related to home restoration and cleaning.

Through the platform, developers can also submit their game concept for testing, which we usually do on Facebook, to assess the game’s marketing potential. CTR is a usually good indicator of what the consumer demand would be. What you don’t want is for developers to build something if there’s no appetite for it.

The Coda SDK includes everything developers need to bring their game to market in one software development kit. There’s measurement and attribution, including Adjust, Firebase and game analytics; monetization solutions with MoPub as the mediation layer and ad networks like Vungle and Unity plugged in; and also some gameplay elements. The SDK also allows us to do a lot of testing from the server side – A/B testing, variant testing, etcetera – which puts us in a good position to measure and track performance and benchmark data.

Finally, we publish the app. Our overall vision is to automate this entire end-to-end process.

What needs to happen before there’s total automation?

For that, you need a single data source. We use Adjust for attribution and to tie users together with revenue and user acquisition costs.

It might sound easy, like all you need to do is just take a simple rule set – [such as] if the cost per install is greater than the lifetime value, reduce bids and automate it. But we often see that people still feel the need to run manual checks. We want to build a scalable automation layer so developers can have faith in automated decisions.

Imagine if you could give 90% of your manual tasks to a machine. You’d have a huge amount of time back to work on user acquisition strategy and creative optimization.

How time starved is the average game developer?

It’s less about being time starved and more about developers wanting to be able to make data-driven decisions using neutral, third-party insights as fast as they can about whether to keep working on a game or to kill it.

That’s why they need benchmark data, which is also useful for gathering tips and tricks about how to improve their game. Adding in certain mechanisms or functions or game economies can really improve retention, for example. If you know that adding in a certain number of bonus levels is good for retention or adding three rewarded videos after three interstitials reduces retention by X%, you can really start to optimize – and the studios don’t have to learn that stuff anew on every game.

What other insights have you uncovered?

A key one is related to level progressions and user onboarding. You want people to enjoy the game they’re playing, so the first five levels should be really easy for a player, almost impossible to fail. Then, gradually, you can increase the complexity of the game and introduce more difficult elements. That helps create a nice game curve.

What coronavirus-related trends are you seeing?

We’re seeing more game launches and an increase in time spent. Some games have increased playtime by up to 25% over the past few weeks.

Are you noticing any monetization trends among the studios you work with, such as an uptick in programmatic?

But with monetization, it’s always about striking a balance between CPM and fill rate. Just because someone gets higher CPMs from advanced bidding doesn’t mean they always get a higher fill rate.

That said, I’m convinced that monetization will be driven by advanced bidding over the next three to five years. When you have Facebook and Google supporting something, you know that is where the industry is going to move.

Are you seeing new or interesting ad formats starting to get popular?

Sadly, there hasn’t been a huge amount of new formats or appetizing opportunities coming through over the past 12 to 18 months. You might call it a lack of innovation. People are mainly using existing, well-established formats, like rewarded and playables.

Why do you think that is?

It might have to do with the consolidation that’s been happening in the ecosystem at the macro level. There are now only a handful of major players in the app advertising space: Facebook and Google, of course, but also AppLovin, ironSource and Vungle. The focus on creating major players has perhaps meant a bit of a distraction away from new and shiny things.

But as these players look to grow, they’ll need to find new ways to compete with Facebook and Google, and that could drive more innovation over the next 12 to 24 months.