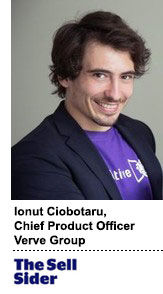 “The Sell Sider” is a column written by the sell side of the digital media community. Today’s column is written by Ionut Ciobotaru, Chief Product Officer at Verve Group.

With the loss of IDFA and the resulting limitations on audience targeting, all signs point to a significant hit for app ad revenues.

Developers can expect to see a drop of an estimated 50% in ad revenues, if not more, due to the transition, according to Facebook testing. Although Apple likes to point out that ad revenues continued to grow even after it introduced its Intelligent Tracking Prevention (ITP), that’s really only half the story. Most of that growth occurred within walled gardens, and at a time when the digital advertising market was substantially smaller.

Last November, Apple introduced a program that reduces App Store commissions from 30% to 15% for small businesses, which is being touted as a win for independent app creators. For a small business, that’s a $150,000 bonus.

But don’t break out the champagne just yet. In the context of Apple’s other policy shift – the removal of the IDFA – the picture is more grim. That change will more than offset any commission reduction benefits in the coming year.

For the industry as a whole, cutting commissions is just a distraction from the larger harm Apple is levying on developers and publishers. However, smaller developers can benefit from the lower commission by strategically diversifying their business models for monetization.

While a possible addition of up to $150,000 to the bottom line can be a big deal for an independent app publisher, for Apple that revenue is insignificant. It’s estimated that about 98% of iOS apps generate less than $1 million in annual revenue, but these apps represent only about 5% to 8% of Apple’s app store revenues. In other words, the 2% of companies that will continue to pay the original 30% commission account for about 95% of the app store’s revenues.

Regardless, even if you concede Apple’s new program as a “backing down” due to industry complaints, there’s another initiative that the company is decidedly not backing down from, and that’s its crippling of IDFA. This move alone poses far more financial danger to the app publishing industry than a continuation of high commission structures ever could.

An opportunity lies within a hybrid monetization strategy

The lower commission fees will provide some relief to smaller developers who see their ad revenues decline. For some apps, the reduction might even prove to be a necessary lifeline. Ideally, developers with free, ad-supported apps will be able to find the sweet spot wherein in-app ad revenues are supplemented by in-app purchases that remain below the $1 million mark.

Change will continue to be the only constant when it comes to giants like Apple. As developers try to strike a financial balance amid Apple’s shifting commission and advertising policies, they must continue to strive for efficiencies wherever they find them. Ultimately, continued success in the increasingly complex app space will require diligence, nimbleness – and the realization that there is no such thing as “free money” when it comes to a tech titan.