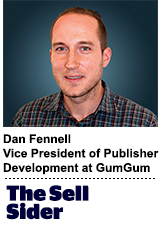 Publishers and tech vendors may be able to reap some rewards from the practice. It’s not exactly a win-win for them, however, and ad refreshing has trade-offs. Advertisers who are aware that ad refreshing is taking place tend to view it with varying degrees of vexation. After all, buying an ad impression has usually meant owning that impression for the entirety of a visitor’s time on the page.

While many publishers use ad refreshing with good intentions, bad actors have given ad refreshing a negative reputation. I have a few recommendations for how we can dispel any air of illegitimacy that refreshing may have for some advertisers.

Ad refreshing doesn’t always boost publisher revenues. Yes, it can increase publisher inventory, but it may also decrease inventory viewability and CTR, which can hurt a publisher’s CPM.

Publishers that want to increase revenue through refreshing have to find a sweet spot where the added value of increased inventory exceeds lost value of decreased CPM. So, even when that equation is balanced to the publisher’s benefit, revenue increases are only incremental.

Then there’s the potential damage to user experiences. When ads reload, they may slow down page performance and can be an irritating distraction. So, for publishers, refreshing has inherent risks where there’s a trade-off between traffic and revenue.

Refreshed ads that appear after the first impression do tend to have lower CTR performance, though there is uncertainty about CTR’s validity as a gauge of user interest and engagement. An ad that appears later in the refresh sequence may be less prone to the accidental clicks that account for most of the high CTRs of the first impression, but it is not necessarily less effective at delivering brand lift, recall or conversions. If you’re a CPA advertiser and someone converted on the third ad refresh within the ad pod sequence, ad refreshing worked for you.

While refreshing may neither help publishers nor hurt advertisers as much as some might think, there are some reasonable concerns surrounding the practice.

Google requires publishers to declare refreshed ads on its Ad Exchange RTB protocol, but most ad exchanges have no declaration requirement. Advertisers who are sold refreshed ad impressions without their knowledge can justifiably feel misled.

There is no universal standard that defines the conditions that prompt an ad to refresh. All refreshed ads reload based either on time, user action, content change or some combination of these triggers.

While many have refresh policies that mirror Google’s, not all exchange policies align. An advertiser may be fine with buying a refreshed ad in principle but may not be fine with it if the ad is continually refreshing out of view, on a page a user has walked away from.

No industrywide standard means that some publishers may be unknowingly hurting advertisers, and advertisers working with multiple exchanges have no clear sense of how a given refreshed ad will perform.

What’s missing in the world of ad refreshing

To bring about further standardization and transparency around ad refreshing, I have three recommendations.

First, to eliminate confusion about what buying a refreshed ad means, the industry should develop a universal standard that defines how, when and the number of times ads can be refreshed.

Second, OpenRTB protocol should adopt an ad refresh signal, just as Google’s RTB protocol already does already, so that buyers know when they are getting refreshed inventory.

Finally, both OpenRTB and Google RTB protocol should introduce signals that identify a refreshed ad unit’s position in the refresh sequence.

To me, advertisers and tech providers need to be aware of ad refreshing and look to it as an opportunity. The way I see it, adopting standards will benefit all sides of our industry.