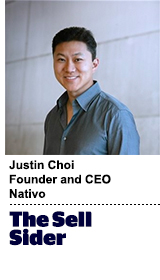 Today’s column is written by Justin Choi, founder and CEO at Nativo.

The age of the platform has, without a doubt, taken a serious toll on publishers.

Direct content consumption on publisher sites gave way to content discovery via search, which – in relatively short order – overwhelmingly gave way to content discovery via social platforms. In the seeming blink of an eye, publishers lost control over how people find and consume their content. They traded this control for scale, and they’ve been subject to the whims of algorithmic platforms like Facebook and Google ever since.

This loss of publisher control over user attention to the platforms has been lamented by many and solved by virtually none. But the answer has been sitting in front of publishers all along – in the form of those little rotating modules sprinkled liberally around their sites. You know, the ones that make all the money.

Over the past decade, publishers have continually incorporated new innovations into their sites. The problem is that those innovations have been almost entirely restricted to their ad units. These days, the most targeted, machine-learning-driven, personalized elements on a publisher’s page are the ads.

Publishers have poured all of their technology investment into precisely the thing that’s causing people to flee their sites. What sense does that make?

The greatest value offered by today’s leading publications is the quality of the content they produce. But that quality is no longer a strong enough competitive differentiator to keep many publications afloat ­– not when today’s tech platforms have trumped quality with ease of content discovery.

Most online publications run their editorial the same way they did in the print world. They never rethought their publishing practices for digital.

Even digital native publications that have never disseminated a single printed word have largely adopted these legacy publications’ outdated content flows. They use the same single headline and the same single image. They put the newest at the top, and they push the older down the page. They show the same treatment to everyone in the country – sometimes to the entire world.

Meanwhile, the rest of the digital world has moved on. Platforms have taken today’s rich algorithms and machine learning capabilities and done the most obvious thing in the world: They’ve shown people the content they want. Facebook, Google and Apple News owe a lot of their success to publishers’ failure to innovate on their own properties, which to this day are poor discovery mechanisms.

Platforms made the jump from chronological to algorithmic content display years ago. Timeliness is a factor in what interests people, yes, but it’s only one of many – and arguably not even the most important. News publications might push back against this notion, but prioritizing content around publication time ignores the fact that not everyone is interested in all newsworthy topics, nor is every piece of content published by news organizations tethered to a fleeting news hook. A great deal of evergreen feature content dies a quiet death within the current structure of most news sites.

Time to unbox the innovation

If publishers want to reclaim audiences, they need to unleash the innovation they’ve concentrated on their ad units and expand targeting and personalization to the entirety of their user experiences.

Investment in personalizing the editorial experience will pay off. We know this because of the effort publishers have already poured into helping their advertisers refine their strategies. With simple headline and preview image testing, advertisers have found that they can boost traffic to their advertorial content five-fold. Editorial content can and must follow suit.

Also, as with ads, publications should deliver content that reflects the reader’s personal affinities. Recency can be a factor in the content shown to readers, but it can’t stand alone. Content can and should still be fresh, of course. But news doesn’t have to be breaking to be relevant to a reader. And even with breaking news, certain pieces are going to be more relevant to a reader than others. Those are the ones that should be highlighted for the individual.

Many publishers might hear this call for algorithmic content discovery as a step closer to the extinction of editors, but that’s absolutely not the case. The role of the editor, in fact, becomes more important than ever. Editors become not just content pushers, but rather curators and rule-makers. Enabled by technology to satisfy their readers’ needs, they can put their deep knowledge of their audiences to better use by crafting and guiding uniquely relevant experiences across their varied readerships.

Old thinking needs a rethink. Publishers must break free of the traditional mindsets that are holding them back. Most importantly, it’s time for them to recall a simple truth that many seem to have forgotten: A publisher’s customers are its readers, not just its advertisers. Innovate accordingly.