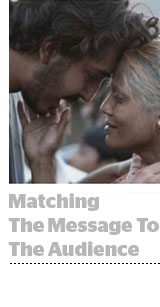 Native content created by values-oriented publisher FamilyShare and distributed on Facebook improved the box office receipts in those markets. The moviegoers just needed to see the right creative message to convince them they would like the movie.

FamilyShare’s posts generated 2.81 million video views on Facebook, nearly three times the contracted 1 million views, during a two-week campaign in February. The videos and posts generated 491,554 likes, comments and shares, 28.5 million total impressions across Facebook and its site and tens of thousands of clicks to the movie’s site and Fandango.

The social media team first tried to distribute the brand’s trailer organically, a strategy that had worked many times in the past. It fizzled. Even after boosting the post, it topped out around 500,000 video views.

So they went back to the drawing board. With the permission of the Weinstein Co., the team edited a 30-second version of the trailer with an impactful moment delivered right away.

“It’s mandatory to have an engaging first three seconds, because that’s when the user makes a decision,” Leal said. Traditional studio trailers start with a black slate and studio logo – “and by the time the logo goes, they’ve swiped down.”

The publisher also packaged the film’s real-life story – an adopted Indian boy finding his mother decades later – with viral headlines that appealed to its audiences’ love of inspirational and against-all-odds content.

One memorable headline drove the biggest results: “He was separated from his mom for 25 years; after 7 years of searching Google Earth images, he finally found her.”

The Weinstein Co. was ecstatic with the results, Leal said. Not only did the movie perform strongly in markets where FamilyShare had huge audiences, the box office went up more than 7% a week after the campaign went live, when similar films decline about 30%.

Leal credits the movie distributor with being flexible and giving FamilyShare wide latitude to sell the film in a way the publisher knew would work best with its audience.

FamilyShare still put some media dollars behind the reworked posts to boost their reach. But because of the organic engagement and share, every dollar spent on Facebook had 10 times the impact it did before, Leal said.

And Leal views Facebook’s tuning of reach based on consumer response to an ad as a positive. FamilyShare tuned the creative message for Lion because it saw the campaign wasn’t resonating with the audience and creating the level of engagement they desired to increase ticket sales.

But Leal sees other brands using paid media as a way to force a message onto consumers, instead of acknowledging that consumers aren’t responding to a piece of content.

“They’d rather pay money than create another piece of content,” he said.