Future PLC wrapped up a strong year for its advertising business that was fueled largely by the growth of its ecommerce offerings, its first-party data innovations and some recent acquisitions.

Hoping to continue its momentum in the new year, Future announced Horizon, a new video ad unit for mobile platforms, on Monday.

Jason Webby, Future’s chief revenue officer for North America, talked to AdExchanger about the new ad unit and offered some insight into the state of the UK-based publisher’s revenue mix, its continued expansion in the US market and its plans for diversifying revenue in the coming year.

The Horizon ad unit is a video player that sticks to the bottom of the screen on mobile devices and remains visible to users as they scroll up and down the page, so the ad has a large share of the page without obstructing the reader’s ability to see the content (and thus practically guarantees ad viewability scores).

Horizon was designed to optimize the performance of video advertising while balancing the user experience, according to Webby.

“Mobile is an overwhelming majority of what we see people wanting to use and consume, so we want to make sure that the ad experience is a great one,” Webby said. “Off the bat, we're consistently seeing about 95% viewability with the unit, and it works particularly well when paired with outstream video.”

“All of our sites run on our tech, so we have this really powerful capability to look at them in the aggregate,” Webby said. 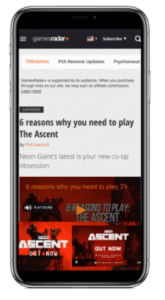 Using its in-house tech stack, Future can trace its audience journey across its sites, as well as the search terms that led to site visitors. Some important audience data points could be the pages people visit or articles they read, how much time they spend per page, whether they click an ecommerce link and whether they complete a purchase.

This whole-platform approach to its ad business has yielded serious gains for Future this year, Webby said. Future reported $804.6 million in revenue in 2021, a 79% jump from last year. That growth rate reflects a rebound from the COVID-19 pandemic, as well as the impact of Future’s expanded ecommerce business and portfolio of content.

It also reflects the company’s 27% revenue growth rate in the US, which was largely the result of recent acquisitions, including CinemaBlend, Dennis Publishing, Mozo, Marie Claire US and TI Media.

“One part of our overall growth strategy is to grow organically. But then also to grow through acquisition where those acquisitions make sense,” Webby said. CinemaBlend, for instance, made Future an important part of the media plan for film and entertainment – a huge ad category as streaming services vie for downloads and promote shows and movies.

The publisher doesn’t need every acquisition to be net-new readers. A scaled inventory network works best when it reaches users many times in different contexts.

“When we add new titles and new verticals, it's interesting to look at how we can combine them with others, where we can aggregate those audiences using first-party data and package them up and target users in different ways across the portfolio,” Webby said.

This approach has allowed for complementary growth across Future’s entire revenue mix. “All the different aspects of the company actually have a knock-on effect to help the rest grow,” he said.

“There’s an article on Tom's Guide from two years ago that reviews a number of direct-to-consumer mattress brands,” Webby said. “That article still sells an average of eight mattresses a day.”