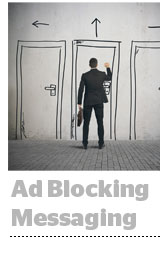 Getting ad-blocking users to change their tune and opt into ads isn’t impossible. In fact, for Dennis Publishing, it has worked as much as 57% of the time.

The UK-based publisher of The Week, Carbuyer.co.uk, Alphr.com and other sites conducted a six-month test of Sourcepoint’s Dialogue tech, which allows publishers to send different messages to ad-blocking users. In addition to convincing nearly 60% of users to opt in to see ads, the tech inspired as many as 38% of readers to take the more complex step of whitelisting the site.

The stats varied because Dennis Publishing tested a variety of messages to identify those that users responded to most.

Since 13% of its readers use ad blockers, those results led to a “sizable recovery of revenues,” according to Nick Flood, Dennis Publishing’s director of product and commercial operations.

After four months of testing, Dennis Publishing gave ad blockers the option to watch a video ad to unlock content. That option performed strongly, with a 75% view-through rate.

The tests spanned four different sites: The Week, Carbuyer.co.uk, IT Pro and Alphr.com. Dennis Publishing could customize the messages by site and segment by traffic source, such as search or social. What worked well for one site did not necessarily perform well for another.

“We’ve learned from the test that every site has a different type of message that resonates with the user,” Flood said.

But some messages were universal. Some Dennis Publishing revenues support the Heart of England Forest Charity, for example. Some messages encouraged ad-blocking users to support the site because it ultimately benefits a good cause.

And users liked choice. When they had two options instead of one, engagement rose 61%.

Dennis Publishing also discovered that subtlety didn’t work. When it featured a small, sticky bar on the bottom of the screen encouraging users to disable their ad blockers, only 3% of users responded. When content was blocked, 80% of users responded. That means the other 20% bounced from the site instead of viewing content with the ads.

Dennis Publishing didn’t say if its unique visitors declined because those users left the site. “We weren’t monetizing those users anyway,” Flood said.

With the results of the six-month test, Dennis Publishing plans to try out different choices, such as newsletter signups. And because of the success with offering video ads as an opt-in, it will expand that choice.

Consumer reaction to the tech has been mild. Flood said Dennis Publishing has received “the odd email” complaining about it,  which is met with an explanation of how its business model works.