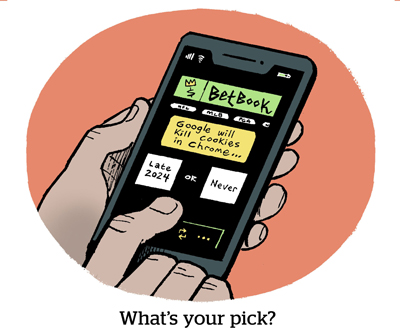 Procrastinators are being given a gift (of sorts): Google is postponing its deadline for the phaseout of third-party cookies in Chrome by a year, until the second half of 2024.

This is the second time Google pushed off the deadline, but it says it’s doing so in response to industry feedback.

Google’s original plan was to deprecate third-party cookies in its browser by Q2 2022. In June of last year, though, Google extended its deadline until the end of 2023, and now you can tack another year onto that.

“The most consistent feedback we’ve received is the need for more time to evaluate and test the new Privacy Sandbox technologies before deprecating third-party cookies in Chrome,” Anthony Chavez, Google’s VP of the Privacy Sandbox, wrote in a blog post on Wednesday.

There’s been some speculation that Google will just keep on kicking this can down the road and third-party cookies won’t ever be deprecated in Chrome.

While that’s unlikely, there’s no saying that antitrust scrutiny and general ad industry unpreparedness might not cause yet another delay.

Most of the proposals in the Privacy Sandbox are already in the midst of origin trials with developers, including the Topics API (FLoC’s replacement), FLEDGE, the Attribution Reporting API and a bunch of more infrastructure-related APIs, like fenced frames, shared storage, federated credential management and CHIPs, a proposal that stands for “Cookies Having Independent Partitioned State,” which stops cross-site cookies from being available beyond the top-level site they were created on.

(P.S., Give someone a cookie for coming up with that acronym.)

Starting in August, according to the new timeline, Google will open Privacy Sandbox trials to millions of Chrome users worldwide. Users will see a prompt and be able to opt in to participate in the trials for all of the APIs that focus on advertising-related use cases, including Topics and FLEDGE.

User testing will run throughout the rest of this year and into 2023. By the third quarter of 2023, Google plans to launch the Privacy Sandbox APIs and make the products generally available in Chrome.

Don’t take your foot off the gas

No doubt some people are wiping their brow in relief, but putting off the end of third-party cookies might cause the industry to dillydally even more.

There was a palpable slowdown of momentum after the first deadline extension and some frustration at the lack of urgency on the part of some agencies, advertisers and publishers to test new solutions.

That said, despite some progress in the Chrome Privacy Sandbox, the APIs wouldn’t have been ready for primetime next year even if more people were working furiously on them.

And that’s because Google is beholden to the commitments it’s made to the Competition and Markets Authority (CMA), the UK’s antitrust regulator.

After an investigation last year poking into the Privacy Sandbox and Google’s plans to phase out third-party cookies in Chrome, the CMA accepted a set of revised commitments from Google, which pledged not to remove third-party cookies until the CMA “is satisfied that its competition concerns have been addressed.”

The CMA’s (and the ad industry’s) main concern is that Google will gain an even larger advantage in the digital ad market if other companies in the ecosystem don’t have access to third-party cookies. (Google can fall back on its unparalleled first-party data, while its competitors have only the tools in the Privacy Sandbox.)

As part of its CMA commitments, Google pledged not to self-preference its own ad tech after removing third-party cookies and to work more openly with third-party companies, including publishing Privacy Sandbox test results and reporting regularly to the CMA on what it’s doing to solicit broader industry feedback.

And all of that takes time, I guess.