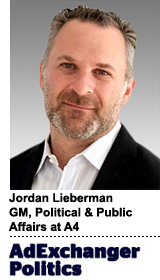 Today’s column is written by Jordan Lieberman, general manager of political and public affairs at A4.

On Sept. 29, 2008, the Dow Jones dropped 777 points and the subprime mortgage crisis caught up with us. The Lehman Brothers crash was two weeks old. Time seemed to slow for many, except for those running the presidential campaigns for the nation’s first post-9/11 open seat.

The presidential campaigns each took different paths following the Lehman Brothers collapse, an inflection point in the campaign. What happened in September 2008 is a good lesson for positioning candidates or causes, which tactics may work best during a socially-distanced campaign season, and what this means for political digital advertising in 2020.

The lessons from 2008 are clear, even if the technology is different.

John McCain suspended his campaign on Sept. 24, 2008, and canceled a David Letterman appearance that night, but he didn’t bring the campaign to a full stop. When he reengaged two days later, the damage was done, and McCain lost ground in national polling.

Americans expect campaigning during a campaign; messaging needs to be tweaked, not turned off. I managed a statewide down-ballot campaign based in midtown Manhattan on 9/11. Rather than demonstrating what crisis leadership looked like in the subsequent days, my candidate evaporated from the public stage and never recovered. No matter what happens in the coming weeks and months, we get a taste for candidates’ leadership styles.

Most overall campaign spending is recession-proof

Since at least 1980, reportable campaign spending has grown steadily and at approximately the same pace as GDP. It may have been reallocated through less trackable conduits, but there has not been a discernible drop in campaign spending through the 1981, 1990, 2001 or 2008 recessions. (This would not include corporate public affairs spending.)

We will see some spending downturns in local races that rely on a high number of low dollar local contributions, but it’s such a small part of digital spending that its effect won’t be felt. Some campaigns won’t raise much, but in the aggregate, the money will be there.

According to Becki Donatelli, chief internet strategist for McCain’s 2008 race, the average online donation dropped from a reliable $120-$150 to under $40 immediately after the fall of Lehman Brothers and never came back. The same will happen this campaign season. In 2008, the crunch forced fundraising innovation, including email list sharing. Digital voter file matching was still years away from scaling up in 2008, but the rise in market share of addressable media was already well underway.

Volunteer-based canvassing is dead for now, but that won’t affect digital directly. Indirectly, one byproduct of the social-distancing political campaign is that it will be challenging for campaigns to generate video shoots with extras. We’ll see more media over the short term using either stock footage or just the candidate speaking.

More than a decade later, many believe that Barack Obama’s team was simply better at leveraging the internet. The missing part, however, is that in 2008, Democrats were more active (but less connected) online. According to a Pew study, Democrats 12 years ago were about twice as likely as Republicans to engage in a number of online political activities.

The picture is muddier now, but the lesson remains: An audience’s media consumption patterns matter. Campaigns should skip Snapchat unless the voting age is lowered to 12. They should forget geofencing rallies because there won’t be any. Social and telephone town halls may emerge because, more than ever, they are the town square. Twitter, LinkedIn and TikTok don’t want political dollars, which funnels funds toward programmatic and Facebook.

OTT inventory is increasing faster than expected. A Morning Consult study showed that nearly half of adults are planning to use streaming services because of the coronavirus outbreak. More people watching means more inventory. Assuming the significant increase in inventory supply and tempering of commercial ad demand, we might see lower OTT costs and a swifter transition for politics and public affairs. Given the size of the market, these costs are more variable than other programmatic tactics.

The social-distancing campaign season will feature more OTT spending than expected, and the loss of live sports will force a massive shift in dollars to cable news networks and away from anything broadcast.

Here’s a headline from November 2008: “Media In Recession: Broadcast Stumbles, Cable Capitalizes On Interactive Platforms.” We’ll see the same headline in the next several months as campaigns take a closer look at efficiency in their media buying.

Campaign life goes on. After the market crashed in 2008, the campaigns didn’t pause. And they won’t pause this time either.