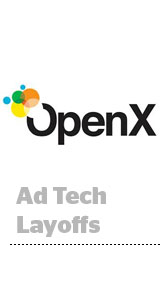 OpenX has laid off 100 staffers, a process that started weeks ago and included a massive round on Tuesday. It will also sunset its ad server by the end of the year.

The departing staff includes engineering, product and tech employees, and OpenX will shift those roles to Krakow, Poland, which has strong engineering talent at lower costs. Two dozen people work there now, and OpenX plans to double that number next year.

OpenX also laid off people in account management and platform demand. The New York and London offices shed employees as well as the headquarters in Pasadena, Calif. The company closed its office in Santa Clara, Calif.

OpenX said the layoffs, which occurred after a business review earlier this year, are necessary because it needs to quickly shift away from its legacy display advertising business and into video. OpenX said it got millions in connected TV revenue this year and its video business increased 600% this year.

“We are now operating from a more streamlined organizational structure to enable us to continue to succeed in the market,” an OpenX spokesperson said.

While OpenX claims that it’s entering its fifth year of profitability, its peers have all publicly struggled in recent years.

The company stands in a crowded field, dominated by Google’s exchange, with AppNexus, Rubicon Project, Index Exchange and OpenX fighting for the remaining market share.

Rubicon Project, the first to flounder, is almost done engineering a turnaround that required it to use cash to fund a take rate it slashed in half. Index Exchange gamed the auction to compete. And AppNexus set aside plans to IPO and instead walked into AT&T’s community garden, becoming part of the ad unit Xandr.

This strategy disadvantages OpenX which, sources say, often charges fees close to 20%, on par with Google. But Rubicon Project charges 12%, and AppNexus averaged 8.5% a year ago. Agencies and DSPs are also using supply path optimization to find the best-performing route to a particular publisher, and that’s often the exchange with the lowest fees.

And then, ad buyers turn off the remaining exchanges, like OpenX, with higher fees. Layoffs could allow OpenX to lower take rates.

OpenX said that take rate pressures aren’t a factor in the layoffs. Instead, it’s eyeing the video opportunity. It’s not the only exchange to pivot to video. AT&T acquired AppNexus this year and quickly retooled the platform to sell connected TV and video supply, enriched with AT&T mobile carrier data.

OpenX wants to join the fun.

“We are proactively addressing how we can maintain our leadership position for years to come.   We recognized early that this requires diversification of our core business and increased investment in growth areas,” a spokesperson said.

OpenX said that over $100 million in investment will help it fund its next chapter. To date, the 11-year-old company raised over $70 million.