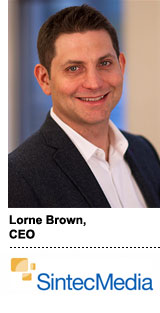 Lorne Brown, former CEO of Operative and president of SintecMedia, will ascend to the CEO position at Sintec Media. Outgoing CEO Amotz Yarden will assume a seat on the board.

TV broadcasters can use the product to sell OTT, linear and digital in one fell swoop or find the same audience in many channels. OnBoard aims to help any sales efforts that involve audience targeting or span digital, OTT and linear TV.

“We are really good at organizing very complicated things to be sold and giving companies flexibility,” Brown said.

Brown talked to AdExchanger about how the acquisition is going and SintecMedia’s plans to go public.

AdExchanger: Bring us up to date post-acquisition. What’s the vision behind SintecMedia’s push to create a product that spans linear and digital?

LORNE BROWN: When SintecMedia was acquired for $400 million by Francisco Partners, the goal was to do a roll-up strategy and buy four or five other companies. Instead, they decided to do one big deal. That was Operative.

Some of our customers have this converged vision of linear and digital. Credit Suisse analyst Omar Sheikh predicted that $100 billion is going into targeted TV. And my belief is that broadcasters and TV companies are going to win that battle.

Yes, Facebook and Google and Snap will get a piece, but the bulk of the dollars will go to TV because it comes down to content and data, and it’s much easier to get data and a targeting strategy than it is for digital giants to secure good content.

What are customers noticing that’s different about your products post-acquisition?

We took the best of Operative and best of Sintec and created a future-of-TV product called OnBoard. We have been messaging [customers about] the new business model and OnBoard and are getting into the larger TV companies to try to partner with them and find out what pieces were most important.

For some people on the local TV side, it’s about bringing together fragmented linear pieces for a national presence. For the networks, it’s convergence or [selling] a single show across screens or an audience across screens. And for MVPDs, it’s linear, digital and addressable in one proposal.

Google is deprecating DSM [DoubleClick Sales Manager], its order management tool that was competitive to Operative. As publishers move away from that tool, how does that change the competitive landscape for you?

I can’t say it comes as a total surprise because Google doesn’t like to embed themselves in the operations of businesses. They seek automated solutions. It’s a big opportunity for us to go to these clients and increase our customer base as a result and to help them in ways they haven’t been helped before.

So Google couldn’t do what you do?

It got really hard for them. I think initially they looked at it as a strategic product – otherwise they wouldn’t have done it – to get more ingrained [with the publisher]. They were thinking about owning the order.

But owning the order means working with several non-Google companies, helping employees be more efficient at their jobs internally or taking a boardroom strategy to market with products, pricing and packaging that together.

The list of requirements needed to satisfy people in this category became so long, they realized they don’t want to be in a business that requires customization. Operative has been through so many iterations that most of the time we don’t do any customizations. It’s configuration based on a core. This is the right move for them – though I’m biased because I stand to benefit.

Being part of a private equity roll-up comes with some stereotypes – that there’s lots of cost-cutting and that the company will be flipped. Do any of those apply to SintecMedia?

Francisco Partners’ company shelf life is between four and seven years. They do enterprise buyouts. Our goal is to take the company public in a few years.

When Sintec acquired Operative, we [removed] a lot of the redundancies, especially where there were obvious ones.

Sintec is a very profitable company. We have a lot of things we want to invest in, and we will take a short-term hit on our profit to make sure we are making those right investments and putting resources and support around our customers’ needs.