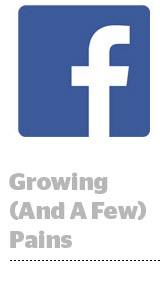 The company reported on Wednesday that monthly active users are now 1.9 billion, up 17% year-over year – roughly one-fourth of the world’s population – while daily active usage saw an 18% YoY uptick to 1.3 billion.

Mobile revenue, as always, is the majority of overall revenue at 85%, up from 82% this time last year. Total revenue for the quarter clocked in at $8 billion, beating expectations by about $200 million. Advertising revenue shot up 51% from Q1 2016 to $7.9 billion.

Basically, Facebook is monetizing the heck out of its users.

Average revenue per user (ARPU) in the US was up year-over-year from $12.43 to $17.07, an approximately 37% increase. Possible reasons for that considerable leap in ARPU include expansion of its Audience Network advertising platform and dramatic acceleration of Instagram – both in terms of users and monetization. Facebook recently announced that Instagram is up to 700 million monthly active users.

And that, in fact, ties into one of Facebook’s growing problems.

Wehner raised the specter last year that the news feed is running out of space to place ads. “We continue to expect ad revenue growth rate to come down meaningfully over the course of 2017,” Wehner reiterated. “We expect ad load to play a less significant factor in driving growth after mid-2017.”

Another looming issue: violence. The company said on Wednesday that it plans to add 3,000 people to its content safety team in its ongoing battle to fight violent and harmful content from flooding its platform.

Shares dipped slightly after hours by around .05%.

Artificial intelligence will play an increasingly central role in the detection and moderation process for unsavory content, but humans are still indispensable.

“Right now there are certain things that AI can do in terms of understanding text and understanding what’s in a photo and what’s in a video – that will get better over time,” said Mark Zuckerberg. “But given the importance of this and how quickly live video is growing, we wanted to make sure we provided as safe of an experience for the community as we can, which is why we’re almost doubling the the size of the community ops team.”

But business is booming despite the public backlash against violent content on Facebook – and Snap should be concerned.

Although Zuckerberg admitted to being “a little bit late” to the AR trend, “at this point, we’re pretty much ahead in terms of the technology that we are building, and making it an open platform I think is a big step forward,” he said.

At its F8 developer’s conference last month in San Jose, Facebook rolled out closed beta access to its Camera Effects platform, effectively giving developers the ability to create their own filters and frames.

“The camera is becoming more central that the text box in all of our apps,” Zuckerberg said. “This is part of making the camera the first augmented reality platform.”