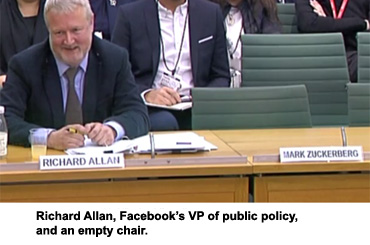 Thing is, Zuckerberg wasn’t there, having declined repeated invitations to testify before the UK’s Digital Culture, Media and Sports Committee.

The parliamentarians from Britain, Canada, France, Ireland, Belgium, Brazil, Argentina, Singapore and Latvia who did show up for the international confab were not pleased.

“How does it look that Mark Zuckerberg is not here today?” asked British Labour MP Clive Efford.

“Not great,” admitted Richard Allan, Facebook’s VP of public policy, who was there to testify in Zuck’s stead.

The upshot back in April was that Facebook cannot be trusted to regulate itself, particularly on the election integrity front. The takeaway this time around was much the same.

Allan, a former Liberal Democrat MP and current peer in the House of Lords, told his interrogators that he and Facebook are working to “precisely understand the kind of regulatory framework that’s in everyone’s interests.”

Facebook and other tech companies have recently started to voice support for more wide-ranging privacy legislation, whether that be the General Data Protection Regulation in Europe or a cohesive privacy law in the United States to circumvent the headache of complying with multiple states passing their own rules.

“I don’t think it’s up to Facebook to determine what regulatory structure it should be under – it should be up to Parliament to determine that and that’s why we’re here,” the committee’s chairman, Conservative MP Damian Collins, noted in a dismissive aside.

Facebook knows the pendulum is swinging heavily away from self-regulation and it’s adopting the posture of a company that’s contrite for past actions but ready to acquiesce to the changing winds.

But Facebook’s trust factor is in the toilet.

“You have lost the trust of the international community to self-police and we have to look for a method for holding you and your company accountable,” said Canadian representative Charlie Angus.

Be that as it may, and strong words aside, advertisers have yet to defect en masse from the platform, and Facebook continues to rake in money hand over fist. Revenue was $13.73 billion in the third quarter alone.