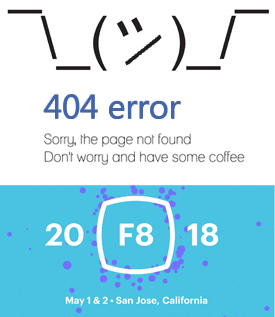 “This has been an intense year – I can’t believe we’re only four months in.”

Mark Zuckerberg kicked off Facebook’s F8 developers conference in San Jose on Tuesday with a joke, and he got a few chuckles from the gathered crowd of 5,000 developers.

Facebook’s recent crackdown on API access and data flows in response to the Cambridge Analytica situation are no joke, however, to the developers who build on its platform.

But most developers don’t build their entire businesses on Facebook’s platform anymore, and they haven’t since the early days when apps easily went viral and the money flowed.

“Which Simpsons Character Are You?” quizzes and horoscope apps still exist today, but they’re not where the money is. Facebook monetizes through paid distribution, and developers use certain Facebook tools to monetize, usually with ads, and to augment their user experience. It’s a simple equation.

That doesn’t mean rapid and unexpected changes aren’t frustrating, though.

“It’s hard to be a Facebook developer, not because of all the bad press Facebook’s getting but because they keep breaking things,” said a developer at F8. “Then again, I also have empathy for Facebook. They’re just trying to preserve their business so that we can have one.”

Although changes to an API “can be very detrimental” – one large game developer told AdExchanger that the recent deprecation of an API feature “cost us thousands of installs a day” and took a lot of engineering effort to deal with – they’re not “insurmountable.”

The API restrictions are less of a problem for some than the lack of communication on Facebook’s part.

“When all this Cambridge Analytica stuff started, there was a ton of fear, uncertainty and no communication,” another developer told AdExchanger. “People from the partner team should’ve been reaching out to us, but all they did was post the changes on the Facebook developer site, and then things started breaking.”

But even without the Cambridge Analytica scandal, Facebook would have had to shore up its APIs in advance of Europe’s General Data Protection Regulation (GDPR). Developers should have anticipated that, said Christopher Ogden, CTO of social video analytics company Delmondo.

“If Facebook hadn’t been pushed by Cambridge Analytica to make changes, they would have had to do it because of GDPR,” Ogden said. “These changes were inevitable.”

Inevitable and not as serious as GDPR, either. The EU’s privacy law “is much bigger than anything Facebook can throw at us,” said Brian Meidell, CEO of virtual reality game developer FRVR, whose company wasn’t directly impacted by Facebook’s API changes.

Yet putting aside even GDPR, change itself is inevitable, Meidell said, regardless of anything else happening in the world that might force it at a more rapid pace.

“People who ‘grow up’ inside a platform, they have a tendency to see all of the rules that were in place when they started, as if they’re the laws of physics or something, like they can’t change,” he said. “And then, when they do, they feel super-inconvenienced. But it’s just the cost of keeping up with a platform.”

And the cost of relying too much on a platform’s feature set. Startups that build on Facebook shouldn’t be shocked when the ground shifts under foot, said Seyi Ayeni, CTO and co-founder of Tolet.com.ng, Nigeria’s answer to Zillow.

“It’s a no-brainer that these sorts of changes can happen,” he said. “If you build your entire business around a platform and the platform decides to restrict access to a feature, of course that’s going to impact your business, but you should expect that.”