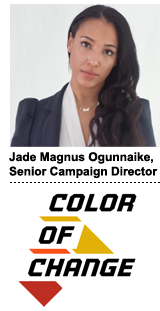 Jade Magnus Ogunnaike has a message for advertisers: “You have so many opportunities to change things for the better.”

Ogunnaike is a senior campaign director at Color of Change, the civil rights advocacy group that helped spearhead the Facebook advertising boycott in July.

Although the formal boycott ended last month, there’s still a spotlight on the importance of racial justice and equality. The boycott helped brands start to exercise an important muscle.

In the wake of the George Floyd protests and the killing of Breonna Taylor, corporations and tech companies began speaking about their commitment to racial justice.

“And so we simply demanded, along with our allies, that these same corporations voicing support for Black lives and racial justice back that up with action,” said Ogunnaike, whose job includes projects related to economic justice, universal basic income and tech platform accountability.

Although there’s a notion that tech companies are more progressive and open-minded than other corporations, that often isn’t the case. “We need to remove the veneer of tech innovation and youth as substitutes for commitment to civil rights,” she said.

“We’re figuring it out and we’re talking about doing a number of different things,” Ogunnaike said.

AdExchanger: How were you hoping Facebook would react to the boycott?

JADE MAGNUS OGUNNAIKE: We were looking for a variety of actions from Facebook, but the most important one was to create a civil rights infrastructure at the company. They have billions of users and no department or infrastructure to address the way that discrimination and bias show up at every level of the company.

Did the boycott achieve what you wanted it to achieve?

We asked that companies pull their ad dollars from Facebook. One of the main reasons why Facebook has been able to act the way it’s acted and refuse to be accountable is because it makes something like $70 billion in ad revenue a year. We needed to build public understanding of how Facebook has failed Black, low-income and marginalized communities. More than 1,000 companies pulled out.

In the middle of our campaign, Facebook released its last civil rights audit and Facebook also did develop an internal civil rights position, although it doesn’t report directly to Mark Zuckerberg, which is what we wanted. We wanted a C-suite person.

It’s somewhat of a start, but there’s still a long way to go.

There were a lot of news reports about how the boycott barely touched Facebook’s bottom line. Was that the point?

Facebook executives have said that they don’t make policy decisions based on ad revenue pressure – which is ridiculous. But Facebook did address the boycott directly both before and during the month of July and they were clearly very concerned. There are also still companies, including Unilever, that are refusing to advertise on Facebook and elsewhere until at least the end of the year.

Believe me, I’m not a person to stick up for corporations, but it’s bad for your business if your ad is showing up next to a white pride ad that Facebook approved or next to voter misinformation. Corporations understand that.

Do you think Facebook is making a good-faith effort to change?

Within any company there will be people who are good actors seeking to push for justice and fairness. But we know that the leadership at Facebook does not have as deep of a commitment as they need to. Voter disinformation on the platform continues to be a major issue, and hate groups proliferate.

During the George Floyd protests, for example, the Boogaloo group rose up and began antagonizing people. We found that the Facebook algorithm was helping them connect with each other. They would put “Boogaloo” as their job on their Facebook profile and Facebook would automate group creation.

I don’t think Facebook intends to connect white nationalists, but they’re allowing it to happen and they’re refusing to act. Facebook did make some changes specific to the Boogaloo movement, but hate groups have long been formulated on Facebook, and it’s happening. This makes it clear that Facebook does not have a deep commitment to civil rights.

What about the free speech argument?

Free speech is about ensuring that people are not imprisoned for their ideas or the things they say, unless they cause harm to others. What people get wrong is that they think civil rights groups like us want to censor what people are saying. But that’s not the case at all. We’re not trying to stop people from saying things, we’re trying to stop people from voicing sentiments on social media that put other people in danger.

How are you contending with other tech platforms?

Facebook in some ways is the most visible bad actor, but far from the only one. Amazon is one of the worst offenders of civil rights in the country, from the way they refuse to pay the people in their warehouses a living wage to the conditions people work in. We’ve personally met with Amazon about this.

We’ve also met with Twitter time and again and we’ve run a campaign for three years now to take Donald Trump off of Twitter. The first time they took any action was putting a label on Trump’s “when the looting starts, the shooting starts” tweet, but other of his posts with racist and misogynistic language that incite violence have remained up since 2016. Our conversations with Twitter continue.

What do you want to say to advertisers now that the official Facebook boycott is over?

Civil rights groups can hold tech companies accountable to a certain extent, but the Stop Hate for Profit campaign showed that advertisers can be very important players – and that they can continue to hold Facebook’s feet to the fire.

For one, I would ask advertisers to invest in alternate forms of media, such as Black media. And it’s also important for ad companies, as it is for any corporation, to deal with the macro issues, including pay disparity, gender and race, as well as what could be viewed as the micro issues. Perhaps a manager who is insensitive to the needs of people from low-income communities.

Civil rights audits are important for companies to really put their money where their mouth is when it comes to voicing support for racial justice and equality.