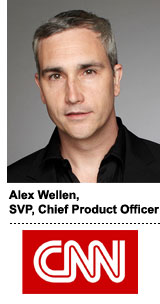 To be a modern broadcaster, CNN believes it has to distribute content everywhere and be a launch partner when platforms like Snapchat Discover, Apple News and Facebook Messenger roll out publisher products.

In the past two years, CNN has added roughly 20 platforms to its distribution list and, in the past year, it spent $20 million on creating experiences for those platforms.

“The benefit of being early, and getting that phone call early, is that you can shape the product,” said Alex Wellen, SVP and chief product officer at CNN, who focuses purely on CNN’s digital business.

His goal is to figure out what it means for CNN to be a “modern broadcaster.”

“Broadcaster is kind of a throwback term,” he said. “How do we deliver content to people and create an experience worth paying for?”

At Dmexco in Cologne, Germany, Wellen talked to AdExchanger about the broadcaster’s platform strategy, and how the cable TV news channel is positioning itself to become the preferred news channel for every other platform besides cable.

AdExchanger: How does content consumption playing out across different platforms during big news events, like Hurricane Irma?

ALEX WELLEN: We just had our biggest [digital] day of the year when the hurricane came last Sunday, beating the inauguration. It was the third-largest day in history after Election Day and the day after.

On the weekends, 80% of our consumption is mobile. During the hurricane, not only was 80% of the consumption mobile, but it outpaced a weekday, when people check CNN on their desktop at work – which is unheard of.

This showed that we have to think of not only what content looks like on the platforms, but where consumption is happening at the moment.

Which platforms have surprised you?

Snapchat, Apple News and Roku are three platforms that have exceeded our forecasts and expectations. The consumption is massive, and the audience is new. Snapchat reaches a millennial audience of people who may never come into contact with the brand, and I believe it’s in excess of 10 million monthly users.

On Apple News we are seeing 30 million uniques. We are now publishing more content there than any other place off-platform, and doing alerting across the platform as well as bespoke long-form storytelling.

On Roku, the time spent with the device is immense.

Do you need a subscription to view CNN’s video content on Roku?

We have one front door for the brand. There is one app on AppleTV, Samsung, Roku, Amazon Fire and Android TV. Within that app, you get all our clips, some livestreams – and if you sign in, you get the livestream and long-form content. We don’t break up the paid products from advertising-based products.

Is a standalone subscription in CNN’s future?

What I will say is that we will absolutely experiment in 2018. Not necessarily with [live, linear broadcasting product] CNNgo, but with what kind of consumer experiences are worth paying for and having a one-to-one relationship with the consumer.

Consumers are used to paying for CNN’s content via their cable subscriptions. So is CNN better positioned to build a paid video business than other digital publishers?

I would agree that people are accustomed to paying for CNN. One of our core competencies and differentiators is video. A lot of the other brands don’t have the boots on the ground that we do.

How do you value your digital audience on different platforms?

The preference is not to restrict to one platform. I want to have a relationship with the consumer across all digital platforms, from OTT to desktop to mobile, and look at the lifetime users across platforms.

But if [value] is only ad-based, and only a one-time experience, then mobile is still playing catch-up to desktop. Part of that is the creative advertisers need to make, and part of it is the technical hops to enable that direct and programmatic advertising.

How do you move mobile along?

We are really focusing on speed. There is this philosophical debate about apps vs. web. Apps can be more native and responsive, and you can do things you can’t on mobile web. But our mobile web audience is 10 times the size or our app audience, even though consumption is the same. People on apps consume 10 times as many page views and 14 times as much video.

Speed is not always the most interesting thing to talk about. But if ads don’t load quickly, users abandon – and sometimes you can’t get them back.