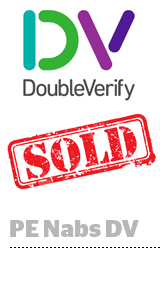 AdExchanger reported in July that DoubleVerify was exploring a sale that would have valued the company in the $350 million range. The exact size of the Providence stake was not disclosed in the deal announcement, but The Wall Street Journal’s sources pegged the investment at $200 million and the company’s total value at “more than $300 million.”

DoubleVerify CEO Wayne Gattinella confirmed that the $200 million price tag is correct as a ballpark figure, “not erroneous, but definitely a little light.”

Gattinella will stay on as CEO after the transaction closes. Laura Desmond, who formerly served as Publicis Groupe CRO and Starcom MediaVest CEO, is joining the company’s board of directors.

DoubleVerify, which has revenues of roughly $70 million, has raised $46.5 million, most recently a $33 million VC round led by Institutional Venture Partners and JMI Equity in 2011. The company was founded in 2008.

Of the big three in the space, Integral Ad Science is now the last independent third-party verification company, and its chief product officer, David Hahn, claimed the company is not running a process or “for sale in any way, shape or form.” Moat was acquired by Oracle in April.

The acceleration of consolidation in the verification space demonstrates that third-party measurement has become de rigueur.

“Third-party measurement is here to stay,” Gattinella said. “It’s an enduring requirement that delivers the transparency any major advertiser requires in order to validate their investment.”

Despite the transaction, Gattinella was adamant that DoubleVerify’s status as an independent third party remains intact.

“Moving from a venture capital-backed company gives us more capital to invest, and for DoubleVerify, this means taking the vision of the organization and the business plan to the next level in ways that still retain our strong third-party charter,” he said.

The organizational vision, and why Providence was interested, centers on three core areas in which DoubleVerify immediately plans to starts investing with its new infusion of capital: existing tools and tech to deliver a higher degree or service and support to its client base; R&D for new products; and the expansion of its global footprint, especially from a brand safety perspective, which requires nuanced attention to detail in order to accommodate cultural and linguistic differences across markets.

It makes sense for DoubleVerify to sell to a private equity firm that can help the company grow.

But the purpose of the investment is not for Providence Equity to help DoubleVerify find a forever home with a strategic player like Nielsen, Adobe (which recently doubled down on media execution through its acquisition of TubeMogul in November) or one of the larger marketing clouds.

Rather than investing in DoubleVerify to sell it later or to combine it with an existing and potentially complementary asset in its portfolio, Gattinella said DoubleVerify is the strategic asset in this case.

“That means we’ll be looking for other opportunities that Providence can acquire to combine with our company to make DoubleVerify more valuable,” he said.

It’s still too early to say exactly what those opportunities will look like, but the end goal is clear.

“Our ambition is to evolve our business beyond just measuring the quality of media placements to also measure the quality of user engagement,” Gattinella said.

Buying third-party measurement tech is about more than just determining whether an ad was viewable or not. One of the reasons Oracle spent a reported $850 million to acquire Moat was to connect viewability with results, rather than to measure viewability for viewability’s sake.

Viewability and fraud measurement companies measure a lot of data, they just don’t necessarily report it all because the client isn’t asking for it.

When measuring video, for example, DoubleVerify knows whether an ad was in view and for how long, but it’s also keeping tabs on whether the sound is on or off, whether the headphones are plugged in, if the video is playing automatically, whether the person skipped, replayed or shared the content – and hundreds of other data points.

“We take in a heck of a lot more data than we’re paid to analyze, but at the moment, it’s not necessarily relevant to the task we’ve been contracted to provide,” Gattinella said. “Now it’s a question of what to do with that data in way that become actionable. That is what our business is about.”