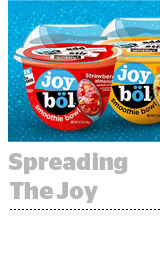 Normally, when Kellogg’s launches a new product, it goes all out with national marketing and big TV budgets.

But Kellogg’s broke all its own rules when its 12-person “speed team” created and brought to market two new products in less than a year: Joybol, a protein-packed smoothie bowl, and Happy Inside, a prebiotic and probiotic cereal. The speed team set up a new office, brought together people from different functions like product and marketing and moved so fast, members texted for same-day approvals on decisions.

“With most of our traditional launches with Kellogg’s, we get the product everywhere we can at the start. It gets all of our support for a while, and then we move on to the next shiny thing,” said Aleta Chase, marketing director for emerging brands and portfolio products at Kellogg’s.

Retailers expect this kind of extensive marketing support. When they decide to put the new product on their limited shelf space, they ask Kellogg’s how many millions of dollars in TV ads it’s spending to promote the product.

Kellogg’s wanted to go for a middle ground with Joybol and Happy Inside. It didn’t want to use its all-or-nothing “sprinter approach” for new products it thought needed time to gain consumer support and succeed. Rolling out a product in just a few channels, including ecommerce, would allow it to test and learn, while eliminating the expectations of a grocery store launch. The approach also mirrored food product startups, which must start with a few test stores and grassroots sampling in order to gain access to bigger distributors.

Joybol, for example, started out with corporate cafeteria distribution through Google, Yahoo, WeWork and other partners with Kellogg’s target consumers – people who liked $15 smoothie bowls and desk breakfasts but wanted a more convenient and cheaper option. Joybol then launched through ecommerce channels such as Amazon Fresh, Walmart and Boxed, with an emphasis on sampling.

“The first point of introduction [for Joybol] couldn’t be a print ad or a TV ad, because nobody had ever seen a smoothie created by adding water,” Chase said.

Happy Inside started out in Kellogg’s club channel, which includes stores like Costco, where it knew customers cared about gut health.

“We wanted a more gradual curve of awareness driving throughout its lifecycle,” Chase said, focused on creating brand ambassadors and word-of-mouth awareness. With Happy Inside, that means getting dieticians to become product influencers.

By testing products with a limited run, Kellogg’s solved product problems quickly. Early feedback about Happy Inside indicated the product contained too much sugar, so Kellogg’s cut back. For Joybol, early reviews suggested the texture was gritty or soupy. Turned out, the water line was difficult to see, so Kellogg’s created vertical instructions that made it easier for snackers to add the right amount of water for the best texture. Pre-launch and post-launch, it sought approvals via text message, allowing Kellogg’s to make decisions in a day instead of weeks.

A bigger product launch may have confronted this problem through slower in-home usage testing. But launching in a single channel accomplished the same thing quickly and provided richer, real-world feedback.

Though Kellogg’s possesses reams of data about consumers’ breakfast choices, which inspired the initial products, the historic data wasn’t very predictive for marketing choices – the rollout was just too different from what Kellogg’s had done before.

Shoppers can find Joybol in grocery stores now, and Happy Inside has expanded beyond the club channel. Chase, who’s worked on products like Pop Tarts and Cheez-Its throughout her 20-year tenure at Kellogg’s, wants Joybol to show retailers that a non-mass-marketing approach can work.

“When we were such big TV and large-scale media investors, it became easy to gain their confidence by saying we were going to spend $10 million on a new product launch,” Chase said. “We are trying to show that changing behaviors through these unique, crafted experience plans can be different than what we did in a traditional category, but still effective.”