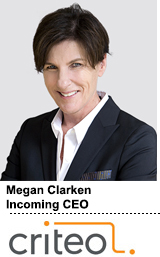 Her 15 years at Nielsen have given her strong visibility and esteem in the ad tech and digital media ecosystem, as well as relevant experience when it comes to operating a company through a ground-up renovation, Rudelle told investors.

Clarken is taking on one of the toughest jobs in ad tech. Criteo is one of the most shorted company on the Nasdaq stock exchange, since analysts expect privacy regulations and mobile operators like Apple and Google to increasingly squeeze out retargeters and cookie-based ads. Criteo shares, which peaked at almost $55 two years ago, are trading at about $17.50, down 15% after the earnings report.

Criteo’s revenue has been in stuck in neutral for the past year, and ticked down 1% to $523 million in Q3.

There are positive signs for Criteo, however.

Unlike many public ad tech companies that have seen Wall Street get behind them despite being unprofitable, Criteo is still a strong cash producer. Criteo’s Q3 profit grew 15% to $21 million. And the company’s cash on hand is at $409 million, up $45 million so far this year.

Criteo’s challenge is to get more customers using its self-serve retail media platform, which is focused more on mobile and uses a SaaS tech model, instead of tying Criteo’s revenue to performance media campaigns.

The new product set grew by 57% year over year, but still accounts for just 11% of the overall business. That’s up from 9% from Q1 this year.

Another promising potential area of expansion is identity, Rudelle said.

Criteo launched a partnership with LiveRamp in Q3 to incorporate IdentityLink, LiveRamp’s audience identifier, into its bidding. That partnership has enabled Criteo to test its first connected TV campaigns, he said, and improves inventory visibility in other cookieless environments, like mobile apps.

Criteo’s mobile efforts have been slow to ramp up because of how ecommerce and retail media customers in the category behave when it comes to apps and their ad tech stack.

Unlike other mobile commerce categories like gaming, ridesharing and food ordering, many mid-market merchants and brand manufacturers – Criteo’s bread and butter – haven’t invested in an app and still rely on their mobile site. Companies without an app or with an early, finicky app keep their advertising with browsers and traditional retargeting.

“We have to convince them that they need to have an app strategy long-term, but it’s a bigger effort than expected,” Rudelle said.

In other words, before Criteo can grow new revenue lines like its app-install product, it needs clients with well-funded apps that they want to drive users to.

On the enterprise side of Criteo’s business, major retailers and ecommerce companies are using the self-serve tech, but it’s less lucrative than the high-margin performance retargeting Criteo is known for.

Those large and sophisticated customers like the SaaS platform because it offers more control, Rudelle said. For instance, a retailer might want to vary bid pricing for specific products, like for weekly rotating deals or products stocked in nearby stores.

“They say they’d rather have control (of the ad tech) even if our teams say that’s going to mean losing some performance sometimes,” he said. “It’s a small fraction of clients, but the most sophisticated and largest.”