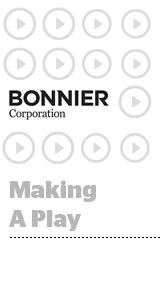 As the demand for digital video increases, publishers like Bonnier Corp. are turning to automation to beef up their inventory.

With more than 35 special-interest titles, including Field & Stream, Popular Science and Outdoor Life, Bonnier’s editors spend a lot of time on video creation.

Even so, “when it comes to a lot of our URLs, we’re generally sold out on video,” said Sean Holzman, Bonnier’s chief digital revenue officer.

Selling out of inventory is a perennial problem for publishers. For Bonnier, the shortfall becomes especially acute during late Q2 and throughout Q3, when its more outdoorsy-themed magazines get a boost from the weather. Readers of Motorcyclist, Motorcycle Cruiser and Moto Intro, for example, are getting ready for big summer outings on their bikes and they’re watching tons of video.

“Scaling video is really important at those times of the year,” Holzman said. “We’re deploying every resource we can and editors are cranking out video. It’s a matter of getting eyeballs to the video so they can convert to new pre-roll impressions.”

To help pump up inventory volume, Bonnier began working with Wibbitz, a text-to-video platform that automates the video creation process. Wibbitz gets paid on a rev-share basis by the publisher.

“For us, video creation is a bandwidth thing,” Holzman said. “Automation tools for producing video content are helpful because the process is time-consuming and needs a lot of resources against it.”

Automation isn’t always the answer, though. While it works well to create companion videos or video versions of list-based articles, some content still needs an editor’s touch.

“If we’re talking about taking a brand-new Harley or Indian out on a test drive, [automation is] not the platform we’re going to use,” Holzman said.

Bonnier toils to keep its viewability rate at or above the industry’s 70% threshold across measurable impressions, which Holzman referred to as “table stakes” at this point.

But advertisers also care about how much time a viewer spends with their video ad – and that often depends on the ad, not the placement.

“People will watch an ad if it’s interesting, and they’ll bounce if it’s not,” Holzman said.

And that’s a major challenge from both a revenue and editorial perspective, he said.

Bonnier can overindex on delivering high completion rates for its own video content and precise targeting, but it’s not controlling everything the user sees.

“We’re going to do our best to get a high completion rate,” Holzman said. “But it does come down to the audience and the creative, not just the audience.”