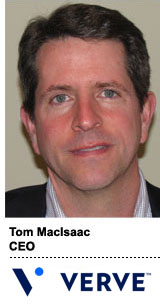 Location-targeting mobile ad company Verve Mobile added several new hires to its sales team, including James Smith as Chief Revenue Officer. Most recently, Smith was CRO for Warner Bros. Entertainment’s Flixster and Rotten Tomatoes properties, and he also previously served as CRO for The Huffington Post and as SVP of key accounts at AOL.

“We’re past the start-up phase, and we’re a company that is growing very fast and generating significant amounts of revenue,” said Verve Mobile CEO Tom MacIsaac. “James has managed a big team at a big company with a large amount of revenue at Aol, and he also has start-up success. There are very few people who have that successes in both the early stage environment and with big companies, and that’s the talent we need as we scale this business.”

The company now has about 80 employees and plans to expand to around 105 by the end of 2013, MacIsaac said. AdExchanger spoke to MacIsaac about Verve’s growth and profitability, the benefits of location-based mobile targeting, and Smith’s hire.

AdExchanger: Tell me about Verve Mobile. How would you describe yourself as a company?

TOM MACISAAC: Verve is focused on leveraging location data to help advertisers and publishers make mobile work better for them. For advertisers, that means leveraging the location of a user to target their ads so that it’s more effective. We might, for an advertiser, target people who are near their store to help drive foot traffic. We might retarget people who have been near their stores in recent times and drive those people back to a retail location.

For publishers, we just use the same type of data to maximize revenue. If a publisher has a location-aware application or website, they are already capturing data, and they understand user location and user location patterns in an aggregate, anonymous way. But in a lot of cases, they are not leveraging it. We can help them leverage it by selling those audiences and selling their audiences to advertisers and getting maximum dollars.

And, for brands and other advertisers, we do audience targeting, where we build audience profiles based on where people are and where they go. For example, if we know somebody shops at a certain place, or we see somebody at a park or at a suburban shopping center, we can use location as an indicator of who that person is and target accordingly.

And how exactly do you determine location?

First of all, when I talk about location data, it’s only opt-in location data, when a user has opted into share location with a location-aware application or mobile website. There are a number of ways that one can determine location, but it generally falls into two camps. First, there is device-level data, where a person has opted in to share location with a location-aware app and they send the GPS location of the user. That is the highest value location data. You can also get location data from the network, but that is less precise. You can do an IP lookup or get a WiFi address, or you can get location from the carrier network, but again, that is less precise and it also requires opt-in from the user.

What is your revenue and business model, and how will James, coming in as CRO, play a part in that?

We generate revenue two ways. One is by selling advertisements to national advertisers, and that is going to be the key focus for James and his team. They are responsible for sales and support to national advertisers, selling them location-targeted campaigns on Verve platform. We also serve publishers, and we act as a turnkey mobile platform for them. For many publishers, we actually do their applications and websites, and we also act as the ad server and supply-side platform. So we have revenue coming from the mobile technology stack that is serving both advertisers and publishers.

You had a C Round in February. Where does that put you now, funding-wise, and what are future plans? Any acquisition plans?

We expect to reach profitability in the fourth quarter of 2013. We have most of the money that we’ve raised still in the bank, so we don’t have any near-term plans for raising additional capital. As far as acquisitions, possibly small acquisitions that would help us with particular pieces in the solution. Perhaps more like acqui-hires, where we would bring on a piece of technology and some talented engineers.

What is the value of geotargeting versus behavioral or contextual targeting? How does geotargeting play a role with all these options?

If you think about mobile, there are some things that are less compelling: there’s a smaller screen than online, and it’s a more fragmented technology landscape, so it’s sometimes hard to do cross-platform advertising executions in a consistent way.

Location is a new data set that is unique to mobile, as powerful and as compelling as anything we’ve seen in digital advertising. It is the ability to reach people on a very personal device – where they are – and understand the context of the user. Location is a central theme of what Verve is about – but, that said, other things matter too. We don’t look at location in isolation. We look at what content users are consuming, what device are they on. We look at all kinds of data sets, but we just think location is a particularly important signal.