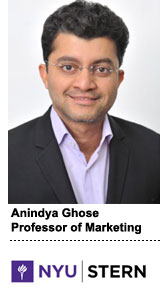 An advertiser looking to boost response rates for a mobile offer can employ a simple solution: Target commuters on crowded trains. And if there’s a delay or disruption, response rates rise further.

The reason? The more crowded the subway car, the more consumers immerse themselves in their phones to avoid contact with the strangers next to them, according to research by Anindya Ghose, a professor at New York University’s Stern School of Business.

His book, released Tuesday, “Tap: Unlocking the Mobile Economy,” includes the results of mobile advertising research he’s conducted over the past few years. Like the research on the behavior of train commuters, the book’s findings reveal simple, surprising and revelatory truths.

Working with 3,500 retailers in 374 cities and towns in Germany, Ghose explored the interplay between a consumer’s distance from a store and the discount being offered. “They should send the person nearer to the store a lower discount than the people further from the store,” Ghose said.

Ghose talked to AdExchanger about what’s he’s learned about the mobile advertising economy, what he makes of the telco-advertising convergence and what country he thinks is the most innovative in mobile.

AdExchanger: Many of your examples in the book involve studies with foreign telcos. What do you think the opportunity is for ad tech and telcos in the US to come together?

ANINDYA GHOSE: The same opportunities exist and are being harnessed gradually in the US. A big reason Verizon came together with AOL was to try to switch the data together, from offline to online behavior.

The research [I conducted] in China, South Korea and Germany with telcos can be replicated here. I testified in an appraisal litigation case filed by shareholders against Verizon, and our evaluation was that the Verizon/AOL deal was underpriced by $1.6 billion.

The US seems to have gotten a lot friendlier to telcos and ad tech recently, with the FCC ruling that ISPs can collect data. What’s your take on this?

FCC chair Ajit Pai’s logic is that Google and Facebook don’t have to ask us permission to use the data, so why should Verizon and Sprint have to?

A lot of my book talks about the conundrum of consumers getting overwhelmed with ads and offers. The reason is that, as astonishing as it may sound, companies today still don’t have enough data about our preferences. The data exists, but it exists in silos.

Someone has to come and stitch the consumer profile together. In the absence of that, brands send us an overwhelming amount of ads because they don’t have enough information about my preferences.

The solution to this problem is not consumers holding back their preferences, but actually sharing more. When that ecosystem gets more information from us, and they are able to stitch the profiles better, companies will reduce the frequency of ads and offers, and increase relevancy. That will be a happier ecosystem. Consumers will get fewer ads, and companies will get a better bang for their buck because the effectiveness of ads increases.

You talk about how routines can shape offers. What’s an example of that?

When you ask people, “Are you predictable in your behavior?” the vast majority of people will say they are spontaneous. The data shows the opposite. If marketers can figure out our usual patterns of walking, shopping, dining and eating out, they can use that to send us relevant messages.

In fact, there was a study done by Microsoft where they asked for volunteers to share their location data, and they could predict the location of a person six, eight, 12 months in advance. My phone is always with me, and if they can connect the dots, they can predict where I will be eight months from now.

What are your thoughts on the privacy implications of mobile advertising?

The stitching together of data is what’s scared consumers – especially with the FCC [ruling on ISPs]. Everybody has done something funky in their life, and in the grand scheme of things, the vast majority of sins and vices we worry about are irrelevant for the marketing world.

There is little reason for the company to use that information to embarrass people. One embarrassed customer is one lost customer. What we should care more about is this adversarial world of hackers.

And a lot of people don’t understand the distinction between corporate data privacy versus government data privacy. When the NSA snoops on underwater sea cables and plucks out data from Google and Facebook, that worries me. I don’t know what they’re going to do with it, and I don’t want them to misclassify me.

What country is leading the pack in terms of mobile advertising?

China is a crystal ball for what’s happening. At home in the US, we are told that China is all about imitation, not innovation, and that’s not true at all. WeChat has done stuff three years back, like mobile payments that Facebook is doing now. We should recognize that and give credit where it’s due.