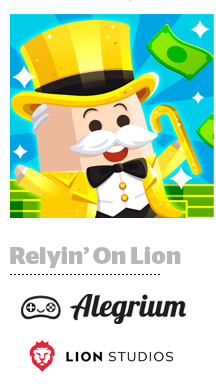 Tapping into international markets, particularly the US, is lucrative but far from easy for a mid-size game developer from Indonesia, especially one trying to replicate a viral hit.

Jakarta-based game studio Alegrium saw immediate success with a series of trivia apps that have collectively racked up tens of millions of downloads since the first title, “Icon Pop Quiz,” launched in 2012.

But “going viral is about luck,” said Stefan Damasena, Alegrium’s CEO. “And we realized that we needed to think more about data and about marketing.”

With just three people on its marketing team, however, Alegrium was looking for a partner to guide its data-driven app marketing strategy. And so Alegrium turned to app discovery platform AppLovin’s newly launched media division, Lion Studios, which helps game developers publish, promote and make bank on their apps. Lion also consults on product development and market research.

Alegrium had already been using AppLovin as one of its mobile ad networks since 2013. When Damasena met Lion’s president, Rafael Vivas, earlier this year, he decided to use the Lion platform to publish Alegrium’s “Cash, Inc.,” a free game that allows players to become tycoons and build their own business empires.

Lion worked with Alegrium to determine the game’s marketability in the US, to see if any of the game’s features needed tweaking and to figure out which data points were most associated with meaningful engagement and retention.

For example, Lion noticed that one of the mechanisms “Cash, Inc.” integrated into its gameplay did particularly well during the World Cup, increasing user value by “a substantial amount,” Vivas said.

Before hooking up with Lion, Alegrium had been tracking more than 50 data points, but without a clear notion of which were tied to valuable outcomes.

“We work to try and figure out what data is most correlated to success,” Vivas said. “And then we can use that data to better define what we’re building out and to get higher-value users into the game, both because the monetization is better and because the game itself is better.”

Since launching, “Cash, Inc.” has 20 million downloads. In July, Google highlighted the game as an editor’s choice in the Play store and it broke the top-10 ranking for games in Apple’s US App Store.

Alegrium is now applying what it learned through its experience with “Cash, Inc.” to another game it’s working on with similar mechanics.

From start to finish, it usually takes six to 12 months to develop a game – which is a lot of time to pour into a project without certainty that the audience (for example, the Western audience that Alegrium covets) is going to enjoy it. Lion is helping Alegrium market a series of prototypes with different themes to see how the market reacts to each before heading into full-fledged production.

App marketing is as much about product as it is about user acquisition, Damasena said. Alegrium had to sunset several completed projects in the past because the finished products didn’t gel with the target audience.

“But if we can get feedback on themes, on characters, on sound effects, that gives us clear direction on what to pursue,” he said. “Marketing needs to be very product oriented.”