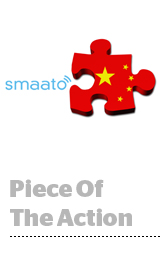 Breaking into the China market requires feet on the ground painstakingly building direct relationships with local players, a fair amount of intestinal fortitude and patience.

It also helps having a Chinese parent.

Mobile ad exchange Smaato is capitalizing on its affiliation with Spearhead Integrated Marketing Communications Group, the Beijing-based offline marketing service provider that acquired the company for $148 million in June 2016.

The opportunity to onboard Chinese traffic onto its platform has a knock-on effect for Smaato, which has inked deals with more than 25 demand partners in China. The more Chinese traffic it has, the more it gets, and that’s attractive to both advertisers in China and global advertisers looking to reach Chinese consumers.

Even with Spearhead’s patronage, however, it took Smaato more than a year and a half to establish a native data center in Beijing. The red tape and regulatory hoops were prodigious.

But it was well worth it, said Smaato CEO and co-founder Ragnar Kruse, a German native based in San Francisco who now spends about one-third of the year in China.

“You can’t serve ads from the US into China because the latency would be too high – as soon as you cross the ocean, you’re adding between 50 and 80 milliseconds each way,” Kruse said. “Latency automatically means you’ll have lower performance, and the Chinese firewall means that any ad serving from the outside is going to be less efficient in China.”

Ad tech companies without local infrastructure are likely doomed, he said. But building a data center on the mainland isn’t enough.

Criteo, for example, had high hopes for China. The company invested heavily in the market, including opening an office in Shanghai and a data center in Beijing.

But fostering regional relationships with advertisers, publishers and ecommerce sites was an uphill battle. Criteo eventually pulled out of China in May after roughly a year, although it’s still working with Chinese advertisers looking to grow their businesses abroad.

The No. 1 thing Sungy Mobile wants in a monetization partner is a “trusted, long-lasting relationship,” said COO Patrick Zhu. And once that relationship is established, it needs to be nurtured by local reps who understand the culture and can speak the language – literally.

“Not all good engineers speak English well, and so they prefer face-to-face talk rather than emails [or the] phone,” Zhu said. “Having a local office can help improve communication and increase the efficiency of working together. It’s pretty important.”

Spearhead, a sprawling conglomerate, has its fingers in an extensive array of pies, including consulting, software development, content creation and data collection. It’s also built a network of around 200,000 field promoters and brand ambassadors that collect shopper marketing data and engage directly with consumers in stores across more than 400 cities in China.

Smaato is using that offline data with Spearhead’s mobile workforce to track and tie visits and purchases to mobile advertising.

It’s still early days for getting that initiative off the ground, but it’s an opportunity that wouldn’t have been available to Smaato without the Spearhead connection.

“Spearhead has been very supportive of us,” Kruse said. “They’re helping us get stronger in the Chinese market. Now the big challenge ahead of us is scaling it all.”