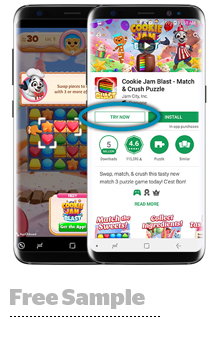 On Thursday, the company released a product called app store demos that lets people try an app directly within the Google Play store without having to install it first. Apple doesn’t enable equivalent functionality within the App Store, at least for now.

When users have the chance to mess around with an app before committing to the download they end up retaining longer, which leads to better monetization and more qualified users, said AppOnboard COO Bryan Buskas.

App store discovery is an abiding pain point for developers, which spend billions a year on app install ads and search ads. But the app stores are overflowing with competition for eyeballs – there are more than 3.3 million apps in the Play store alone – and advertisers inevitably end up wasting large portions of their budget hammering the wrong users with ads.

The idea with app store demos is to take a pull-based rather than a push-based approach to app store discovery.

Sounds a heck of a lot like playable ads, which have been around for quite some time. But there’s a big difference, Buskas said. Most playable ads use HTML5 while AppOnboard uses a native SDK.

HTML5 playables are web-based and easily transacted programmatically, but they take longer to create and don’t support the level of interactivity necessary for demos.

“If you want to showcase an app’s experience with the highest quality, you really need a native SDK to do that,” said Buskas, who noted that AppOnboad can turn around an app store demo for clients in less than a week.

All a developer has to do is provide AppOnboard with the app files or the Play store APK file and specify which parts of the app to feature in the demo. Developers pay a monthly licensing fee for access to the technology, as well as for analytics and creative optimization services.

One early adopter is Los Angeles-based mobile game developer Jam City, which was one of the first to test out Instant Apps when Google made them available in 2017. Using app store demos, Jam City can now release Instant Apps more quickly and “without doing the heavy lifting,” said its VP of publishing, Vanessa Rouhani. Users are also more likely to stick around if they’ve engaged with an Instant App before the download.

But here’s opportunity for non-gaming apps, too, said Buskas, particularly subscription apps, that can offer users a taste of free premium content as an enticement to discover what’s behind the paywall. Meditation app “Simple Habit,” for example, is giving potential future users access to a free guided meditation session. It’s even possible to make in-app purchases within a demo, which has interesting implications for commerce and retail apps.

Interactivity within an app store at the point of purchase will change how developers think about discoverability, said Buskas, who drew an allusion to his days roughly 10 years ago as a senior manager at Activision during the “Guitar Hero” launch.

“We set up kiosks at retail and that was the experience that sold the product more than someone showing up at Best Buy or GameStop not knowing what game to buy their kid for the holidays,” Buskas said. “The storefront is the point of purchase. It’s where the rubber meets the road and Instant Apps change the game here.”